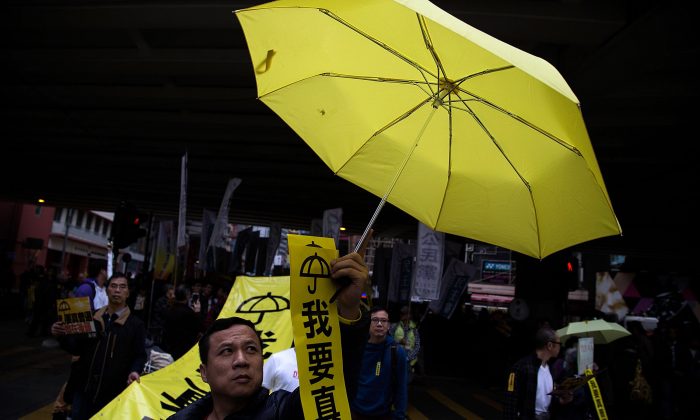 A man holds a yellow umbrella during tens of thousands of protesters march for the real universal suffrage on Feb. 1, 2015 in Hong Kong. (Lam Yik Fei/Getty Images)
Business

HONG KONG—When you fight for freedom, sacrifices have to be made. Even well-to-do hedge fund managers like Edward Chin of 2047 HK Monitor are not exempt.

Since he and other Hong Kong finance figures threw their weight behind the Hong Kong democracy movement in 2014, the cancellation of his regular newspaper column in the Hong Kong Economic Journal was only one indicator that the going would get rougher for him.

But this is not about his personal freedoms. It is about the freedom of Hong Kong and its future as Asia’s foremost financial center.

Why Are the Democracy Protests Worth it?

For the Occupy Central event, even Li Ka-Shing said the disruption was minimal. You are talking about that strip of road in Admiralty [the area around government offices in central Hong Kong]. It makes some inconvenience. But real estate and stock prices went up during that period.

But Hong Kong people have no choice. The white paper [Beijing’s idea of what democracy will look like] was thrown to us and also the decision on August 31st [Beijing’s decision to rule out open elections]. Beijing basically said: We give you rice to eat: If you don’t like it, we can take it away.

They are really breaching the joint-declaration between the U.K. and China which was signed in 1984. That’s the key thing that a lot of people are disappointed about. They even stopped a British MP from entering Hong Kong, when they tried to do an investigation.

I told a member of parliament during my visit to Canada: Don’t give up on justice and just look for international trade as the most important thing in doing business with China.

Human rights are just something to look at as a bargaining chip sometimes. They look more at economic interests.

But China is creating a gigantic bubble, they are printing money. If they print $1 trillion, 30 percent of it goes into a offshore tax-haven account. That goes into the pockets of those who control the country.

Currently, the nominating committee can choose two to three candidates for Chief Executive in Hong Kong. Most of them are pro-Beijing. So if the Chief Executive in Hong Kong is in bed with Beijing, the economic benefits go to the people in power. On the one hand Xi Jinping wants to clean up the corruption issue in China, which we think is a good thing, and on the other hand a lot of the cadres are fleeing.

Let the wives, girlfriends and kids flee to the United States, Canada and Germany. They are just not confident that this totalitarian regime can last.

What Would Be the Consequences for Hong Kong?

I was talking to a family office before. The owner was saying that if the Basic Law is so arbitrary, they can interpret it whatever way they want—he’s concerned about his wealth. Maybe he should put most of his money into some banks in another jurisdiction, he said.

If push comes to shove and if Hong Kong has any problems, he is a pro-democracy guy and believes in exposing wickedness; exposing injustice. But he’ll also be threatened. People will be afraid to speak the truth, like in China now. They might confiscate his assets.

Just like Li Ka-shing. The legal registration of Hutchison and Cheung Kong, Lis’ companies, is now in the Cayman Islands. In case there is a legal dispute, the court of final appeals is based on the Basic Law, which is the mini-constitution.

But it’s not reliable; they are interpreting it in any way they want now. They could use brute force to confiscate the massive wealth of big family offices.

It shakes the confidence of people if China is not following international standards.

What if There Are Real Elections?

Because of family reunions, we could have more than 1 million people coming to Hong Kong every 10 year period. Hong Kong will revert back to China in 2047. So only 32 years to go. In 30 years’ time you could have three to four million people who are actually from the mainland. Hong Kong only has a population of 7 million.

They are also getting foreign passports and people are leaving. I spent more than 16 years in North America. I made a decision to come back in 2000 because Hong Kong is home to me. It’s worth the fight, but definitely some sacrifices have to made. I don’t want to elaborate further.

If you have a real election, it means that the candidate will not be just pro-Beijing. If you have a real leader elected by the people, this person should safeguard the interests of Hong Kong first instead of serving the party. He shouldn’t be afraid of speaking the truth.

If you just have a CCP mouthpiece as Chief Executive, more people like Li Ka-shing will continue to divest their business interests. Li Ka-shing is the number one tycoon in Asia and he has a huge concern regarding the current political environment.

If you just have a CCP mouthpiece as Chief Executive, more people like Li Ka-shing will continue to divest their business interests.

And Beyond 2047, the Year Hong Kong Will Completely Revert to China?

We still have to see the Communist Party change. I hope the CCP will have a transformation, which is tough. They also know they cannot run the Party forever like this. Even within the Party they have a lot of power struggles. They cannot let the whole world see that they are barbaric. They act like Conan the Barbarian.

Edward Chin is the founder of “2047 HK Monitor”, a group of finance professionals backing “true democracy” in Hong Kong. Mr. Chin has over 25 years professional experience in hedge funds and securities trading in North America and Asia. He is currently managing a family office based in Hong Kong.