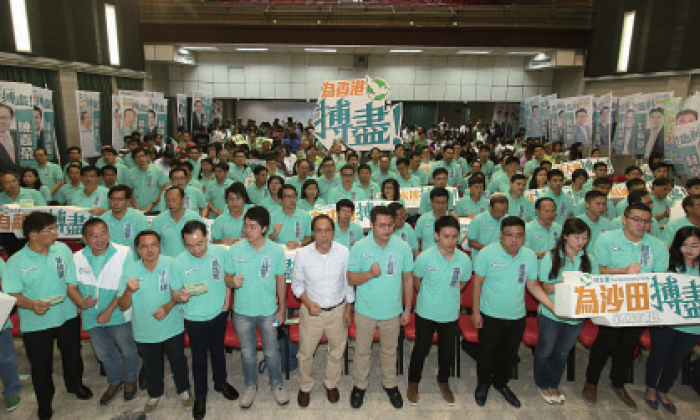 HONG KONG—The 2-week nomination period for Hong Kong’s District Council Election began on Oct. 2. A total of 431 constituencies will be up for grabs in 18 different districts.

Traditionally, electors in district elections are more concerned with livelihood issues such as housing, transportation, and community services. Events in the past year or so might have led to some changes in their voting decisions.

First of all, the 79-day Occupy Movement, a protest for democracy that was triggered by last year’s Aug. 31 decision of the National People’s Congress Standing Committee on Hong Kong’s political reform, has raised the political awareness of many people, in particular among the younger generation.

They have come to realize that the Chinese Communist Party has no respect for the “one country, two systems” principle and will not allow Hong Kong to establish a truly democratic government. This has resulted in the implementation of many public policies that have not taken the best interests of the Hong Kong people into consideration.

As long as the present undemocratic system stays, the Hong Kong Special Administrative Region (SAR) government will only be accountable to Beijing, not to the Hong Kong people.

Recent comments made by Hong Kong Liaison Office chief Zhang Xiaoming about the “transcendence” of the Chief Executive have further eroded people’s confidence in their future.

Another recent drama, in which the University of Hong Kong council voted down the selection committee’s recommendation that Professor Johannes Chan should be appointed pro-vice chancellor, is another slap on the face to the Hong Kong people.

Under these circumstances, the candidates’ political affiliation will perhaps begin to carry more weight in voting decisions. The pan-democrats might stand to benefit as a result.

However, there have been widespread rumors that the pro-Beijing camp has always engaged in vote rigging. This year, the pan-democrats have lodged a flood of complaints to the Registration and Electoral Office on suspected cases in order to raise public awareness.

The Democratic Party, which first announced that testing of drinking water at Kai Ching Estate in Kowloon revealed lead contamination in June, can also help to save the pan-democrats from criticism for being too political and doing too little on social issues.

This does not mean that the pan-democrats will be able to turn the tide in the November election. The pro-Beijing camp will continue to dominate in the District Council. Nevertheless, the election results will be an indication of how much Hong Kong people’s political awareness and aspirations have changed one year after the Umbrella Movement for democracy.