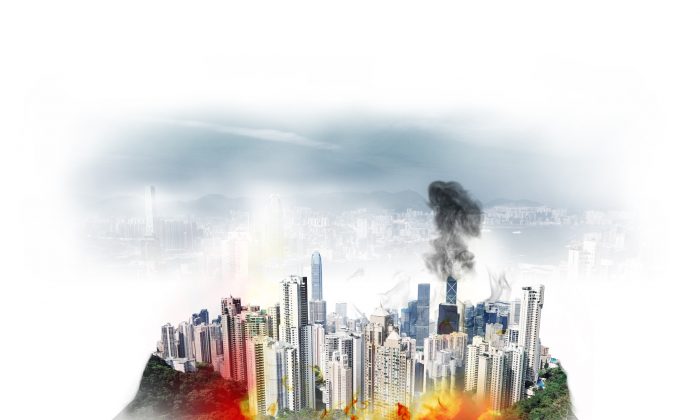 Hong Kong: Many civil society and political parties have protested in front of the Liaison Office, criticising the CCP for violating the international commitment of one country–two systems stated in the Sino-British Joint Declaration. Core values of HK will be actively upheld in the annual July 1 march, online referendum on June 22 to call on the govt for universal suffrage and a democratic election for chief executive in 2017. (Epoch Times)
China

HONG KONG—Hong Kong people are protesting and rejecting the white paper published on June 10 by the Chinese regime’s State Council Information Office (SCIO). The document reinterprets the relation between Hong Kong and the People’s Republic of China, finding that any autonomy enjoyed by Hong Kong is at the pleasure of the Chinese regime.

Hong Kongers say the white paper distorts the meaning of the one country–two systems principle that has previously been understood to promise a high degree of independence to Hong Kong.

The white paper states, “China’s central government has comprehensive jurisdiction over all local administrative regions, including the Hong Kong Special Administrative Region. The high degree of autonomy of HKSAR is not an inherent power, but one that comes solely from authorization by the central leadership.”

The SCIO is the press office for the State Council, the highest office in China’s state administration. It is run by Liu Yunshan, a member of the Politburo Standing Committee of the Chinese Communist Party (CCP). Issued during the politically sensitive period between the June 4 anniversary of the Tiananmen Square massacre and Hong Kong’s annual July 1 march and protest, the white paper has been viewed in Hong Kong as a threat to its autonomy.

The Hong Kong Bar Association (HKBA), a regulatory body for barristers, officially published a response to the white paper on June 11.

The white paper calls the judges and judicial officers of the HKSAR “Hong Kong’s administrators” and asks them to “love the country” of China and safeguard the country’s sovereignty.

The HKBA responded, “Judges and judicial officers of the HKSAR are not to be regarded as part of ‘Hong Kong’s administrators.'”

They added that judges and judicial officers will not coordinate any government’s position or carry out any political missions or tasks, and that under the Common Law, the court’s interpretations will be based on facts, evidence, and arguments between parties “in an open and transparent judicial setting.”

“It is not the case … that in deciding cases judges and the Courts in Hong Kong need to (or can) learn, understand, or take instructions, about any definitive ‘correct’ meaning of the Basic Law from anyone else, be they public officials or scholars, here or elsewhere,” the HKBA’s rebuttal states.

The rebuttal said that if judges and judicial officers are mistaken for administrators, it will send the message that they are part of the machinery of Hong Kong’s government.

It also quoted the HKBA’s 2008 press statement which stated, “The Judiciary in Hong Kong has always been, and under the Basic Law it shall remain, separate and independent from the Executive and the Legislature. … Unless the Judiciary is truly independent, it cannot fulfill its role of ensuring that the Government is acting in accordance with the law.”

The HKBA said that the rule of law does not just mean “doing things according to law” or “governing according to law,” but also requires emphasizing the importance of an independent judiciary and self-restraint in the use of power.

Martin Lee Chu-ming, senior counsel and founding member of Hong Kong’s Democratic Party, said the white paper has no legal effect, and its aim is to frighten the Hong Kong people.

“Even paying attention to it is superfluous,” Lee said.

Lee believes that Hong Kong people do not have to be nervous about the white paper, as it only reflects unilaterally the CCP’s understanding and interpretation of the concept of “one country, two systems.” It does not constitute the law. If it is brought to court, it is only the prosecution’s argument, and in the end the Court will act according to the Basic Law, Lee said.

“The white paper is not the book,” he said. “The court does not have to enforce the law according to it.”

According to Lee, the white paper’s contents show that the CCP does not have the confidence to implement “one country, two systems.”

“They cannot do it, but they also do not dare to retract it,” Lee said. “Thus their explanation is according to themselves. Such a regime is in confusion and unable to govern Hong Kong.”

In response to the white paper’s request that judicial officers be “patriotic,” Lee questioned how to accurately interpret “patriotism.”

“I am fully dedicated and faithful to my profession,” he said. “If there is individual judicial power, there should be individual trials. Is being unconscionable being patriotic?”

Lee called upon the public to participate in the July 1 protest to say “no” to the CCP’s influence.

Many civil society and political parties have protested in front of the Liaison Office, criticizing the CCP for violating the international commitment of one country–two systems stated in the Sino-British Joint Declaration.

The protesters have called on the Hong Kong people to defend the core values of Hong Kong by actively participating in the annual July 1 march as well as the online referendum on June 22 that calls on the government for universal suffrage and a democratic election for chief executive in 2017.

On June 11, a few dozen people from nine different groups, including the League of Social Democrats, People Power, and Scholarism, participated in a protest against the white paper. The protesters went from the Western Police Station to the Liaison Office, threw joss paper into the Liaison Office, an action that expresses sorrow for the current state of Hong Kong, and burned the white paper.

The number of Hong Kong citizens participating in the June 22 referendum is expected to reach six digits.

The Civic Party, Labour Party, Democratic Party, and Hong Kong Association for Democracy and People’s Livelihood (ADPL) also protested in front of the Liaison Office. The Labour Party splashed red paint on their white paper prop before destroying it, hinting that the CCP is staining Hong Kong red.

Labour Party chairman Lee Cheuk-yan said the white paper is “a red book, as it contains all of China’s red thoughts, red culture, and red systems and imposes them on Hong Kong.”

“If we do not defend ourselves in this life-and-death situation, we are worried that Hong Kong’s system will die,” said Lee Cheuk-yan.

About 20 members from the Democratic Party burned the white paper in protest, requesting that CCP leader Xi Jinping respond immediately and face the anger of the Hong Kong people. Around 10 members of the ADPL wore white masks and covered themselves in white powder, blowing white mist from their mouths as satire, suggesting the CCP is causing a White Terror.

Some analysts have said that the white paper is distorting Xi Jinping’s criticisms of Hong Kong Chief Executive Leung Chun-ying on the issue of “one country, two systems,” and at the same time it is threatening Hong Kong society and intensifying social grievances in order to embarrass Xi in front of the authorities.

Recently, Xi’s faction of the CCP has started to take down former CCP leader Jiang Zemin’s faction. Hong Kong is caught in the midst of this political battle.

Shi Cangshan, an independent analyst of CCP affairs based in Washington, D.C., said the white paper was clearly a scheme plotted by the Jiang faction in an attempt to enrage Hong Kong people and embarrass and put pressure on Xi.

According to Shi, in the past the Jiang faction has controlled the SCIO, the Ministry of Foreign Affairs, Hong Kong, and Macao. The fact that the SCIO released the white paper suggests the Jiang faction is behind it.

Shi said that based on conventional practices, this kind of white paper would be drafted by a government department and then released to the public by the SCIO. This white paper was not produced in this way.

A source inside the Hong Kong government who is familiar with the CCP’s operation said Xi has already accused Jiang Zemin of creating chaos and disrupting Hong Kong. Xi will continue to investigate and purge Jiang’s supporters in Hong Kong, the source said, and Hong Kong will have a major restructuring of power, with the possibility that Chief Executive Leung Chun-ying will be arrested.