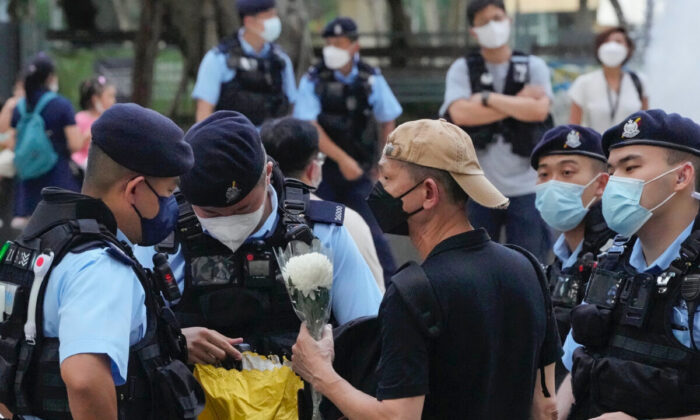 Police officers stop and search a man holding a flower at the Hong Kong's Victoria Park, Saturday, June 4, 2022. Dozens of police officers patrolled Hong Kong's Victoria Park on Saturday after authorities for a second consecutive third banned public commemoration of the anniversary of the Tiananmen Square crackdown in 1989, amid a crackdown on dissent in the city. (AP Photo/Kin Cheung)
Thinking About China

The sinking of Hong Kong officially started with the enactment of the National Security Law (NSL) at 11:00 p.m. on June 30, 2020. Hong Kong has lost its glory, and the defenders of our old core values have either fled, have been detained or are in prison.

With the extreme makeover in the Hong Kong electoral system and the vagueness in the NSL and its interpretation, the city’s rule of law is merging gradually into communist China’s opaque legal system. And worse, professional bodies have also been stripped of their powers—communist Hong Kong and communist China are in full control including: education, medical, accounting, legal—to name just a few.

The latest blow to Hong Kong’s international image lies with the incoming Hong Kong Chief Executive (CE), John Lee Ka-chiu, a longtime policeman and an unpopular official, whose last post was as Chief Secretary. He entered the election race “hand picked,” was literally uncontested and of course won.

Just days ago, Lee has asked the high court of Hong Kong to waive a penalty imposed for his failure to comply with election regulations. The charge was for not submitting on time, three consent of support forms for advertisements relating to the CE election.

If the court grants special “immunity” to Lee, then the CE is definitely above the law and can get by with a much lower moral standard. In similar cases relating to Hong Kong elections, but at the district council level, councilors who failed to comply with the election procedures, received jail sentences. Some were disqualified from holding their post as district councilors.

For incoming CE John Lee, who still remains sanctioned by the former U.S. President Trump’s administration, for undermining Hong Kong’s autonomy, is one of the most controversial Hong Kong officials known for suppressing the city’s freedoms. Whether he can survive the top-job for Hong Kong over a five-year term remains to be seen.

The outgoing CE Carrie Lam Cheng Yuet-ngor was also sanctioned by the U.S. for undermining Hong Kong’s autonomy. Both Lee and Lam were unsympathetic towards the 2019 social protests. They are perceived by many to be loyalists to Beijing, and they have followed the hard-line approach in dealing with the young people’s demands.

Before Lam, there was CY Leung. This former Chief Executive of Hong Kong has made famous the “Separatist” and “Pro-Independence” theory of Hong Kong. In his view, Hong Kong breeds a lot of dangerous people seeking “independence.” Maybe this is one way to prove to Beijing that, a former CE of Hong Kong can still “contribute” to the city, be a super watchdog for many, to keep the city “in order.”

Leung is now one of the many Vice-Chairmen of the National Committee of the Chinese People’s Consultative Conference. Leung is still active on Facebook criticizing the pro-democracy activists in exile, in jail, or those awaiting trial. He even challenges the pro-establishment camp.

With less than three weeks to go before the half way point of the “one country, two systems,” we have all witnessed the deterioration of Hong Kong at ultrasonic speed.

From a commercial perspective, Hong Kong used to provide a fairly “level playing field” for people to run their business and try to succeed. Most people would survive in Hong Kong, and a few really prospered, making big money. Now, Beijing has clearly tightened the ropes, and has implemented the most extreme “hands on” approach to everything, literally choking the city  to death.

The dark political atmosphere in Hong Kong gets worse by the day. The DNA of Hong Kong is now being changed forever, and my pro-establishment business circles of friends, surprisingly, tell me quite frankly that they don’t want to see their next generation grow up in a place where there are so many vague red lines and lack of free speech. Simply put, they don’t want to live under tyranny.

With the COVID restrictions as a false pretense to curb people’s freedoms, and with an escalated exodus of Hongkongers and capital outflow, there is no doubt that the glory of Hong Kong has come to an end. The repressive feeling comes in, on a daily basis.

One pro-establishment business contact looked me in the eyes, just days ago, and said: “Carrie Lam will be history soon. Do you think upcoming CE John Lee and the other sanctioned officials are in their right state of mind to administer Hong Kong?” Nobody knows. But the political differences between the pro-establishment and pro-democracy camps have been narrowed, particularly when it comes to the issue of protection of personal and commercial assets and personal security.

Back to the case of incoming CE John Lee, a hard-liner who has spent most of his career in the police force. A so-called Election Committee of 1500 Beijing loyalists has already acted as a voting machine for Lee. He is cherry picked by Beijing, and was the only candidate in the CE “race,” thus guaranteeing victory.

Also, the 90 legislators inside the Legislative Council are screened and vetted to be bona fide “patriots.”

In addition, Beijing has sent in Luo Huining to run the Central Liaison Office in Hong Kong, he doesn’t speak a lot in public and is someone who is hard to read, but he is considered to be another hardliner from Beijing. For National Security, and many other matters, the CE of Hong Kong reports to Luo who is believed to execute orders straight from the Party.

In conclusion, I definitely see increased turmoil in Hong Kong in the coming days and weeks, leading to the “second half” of the “one country, two systems.” We don’t yet know whether Chinese Leader Xi Jinping will come to Hong Kong on July 1, to mark the “half way point.” But one thing for sure, the second half of the “two systems” will be quite different from the first half. Suppression of anti-government activists is a barometer to many. But Hongkongers continue to fight and won’t give up. That said, the “silence” of Hong Kong continues.