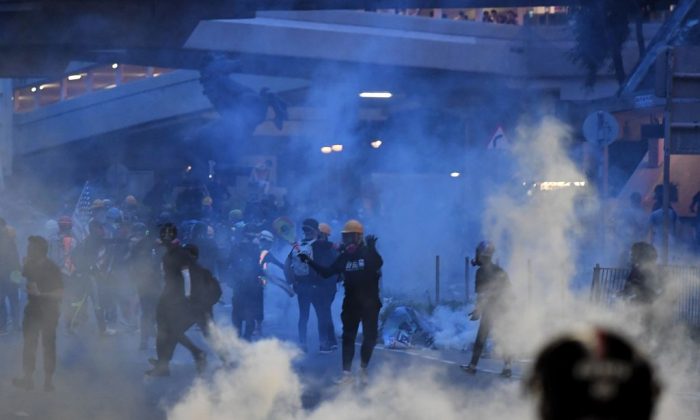 In Hong Kong, more protests are planned on Aug. 11 after another night of clashes between protesters and local police.

This weekend marks the tenth week of protests against a controversial extradition bill, which many Hongkongers fear would undermine the city’s judicial independence as suspects could be extradited and trialed in China’s courts—notorious for their disregard for the rule of law.

On Aug. 10, two peaceful marches were held during the day. About 200 senior Hongkongers marched from the Hong Kong Police Headquarters to the Department of Justice before arriving at the Office of the Chief Executive.

At another event called “Guard Our Children’s Future,” families held a rally at Edinburgh Place in the city’s business district of Central, before marching to the Hong Kong government headquarters.

At Tai Po, a residential area in the New Territories, protesters turned up for a planned march despite not receiving police approval. The crowds then splintered into several fronts, adopting a flash-mob-styled protest in nearby areas. In response, the police fired tear gas to disperse protesters at three location: Sha Tin, Tai Wai, and Tsim Sha Tsui.

In the early hours on Aug. 11, the Hong Kong government released a press release saying that it had arrested 16 people overnight for “unlawful assembly, possession of offensive weapon, assaulting a police officer, and obstructing a police officer in the execution of duties.”

On Aug. 4, Hong Kong media reported that close to 300 people had been arrested since June.

The mass protests in the former British colony started on June 9, when over 1 million people took to the streets to protest the bill. The proposed law was then indefinitely suspended by Hong Kong leader Carrie Lam on June 15 following large-scale protests and public condemnation of the police’s use of force in dispersing protesters who surrounded government offices on June 12.

Now, the protesters are demanding more than just full withdrawal of the bill; they are also demanding an independent investigation into police use of force and universal suffrage.

Beijing has resorted to strong language against the protests in Hong Kong. On Aug. 6, China’s Hong Kong and Macau Affairs Office—Beijing’s highest agency in the city—accused the protesters as “brazen, violent, and criminal actors,” in a press conference.

China’s state-run media People’s Daily in an opinion article published on Aug. 9 denounced the Hongkongers’ demand for universal suffrage as “trampling on the [city’s] rule of law and blasphemy against Hong Kong’s core values.”

There are three protests scheduled for Aug. 11—one of them being a continuation of the peaceful sit-in at the arrivals hall of Hong Kong International Airport that started on Aug. 9.

Hong Kong media reported that about 2,000 protesters took part in the sit-on on Aug. 10, as some greeted arriving passengers with pamphlets in English and Chinese explaining their protests while apologizing for the inconvenience that they had caused.

A rally will be held at Victoria Park, Causeway Bay, beginning at 1 p.m. local time.

At Sham Shui Po, a district in Kowloon, local organizers stated that it would not hold a march originally scheduled from Maple Street Playground to Sham Shui Po Sports Ground after their appeal to a local appeal board was rejected, according to Hong Kong media RTHK.

As of the time of writing, it is not known if a rally will still be held at either the playground or the sports ground.

Epoch Media Group will be broadcasting the protests on Aug. 11 live beginning at 2:30 p.m. from The Epoch Times and NTD Television’s Youtube and Facebook pages.