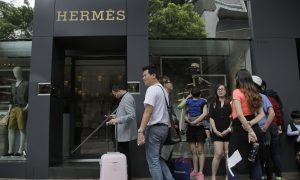 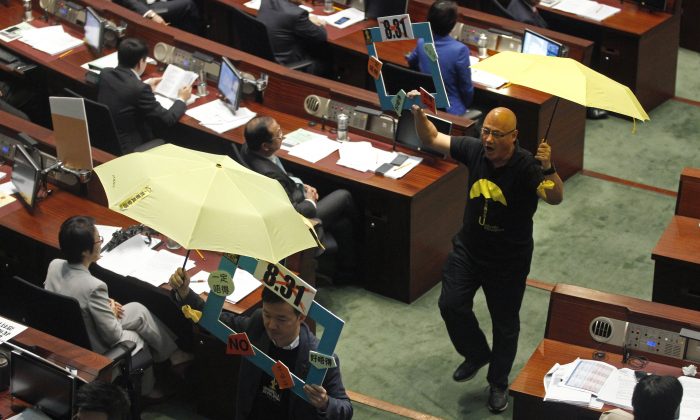 Not long after the Chief Secretary Carrie Lam announced the long-awaited political reform proposal, the pan-democratic LegCo members rejected the plan, and walked out of the LegCo chamber collectively. The proposal was drafted under the 8/31 Beijing framework, obviously the authorities have not made any room for compromise.

The key points of the political reform are:
– Nomination Committee (NC) has 1200 members from the four sectors for a period of five years.
– A prospective candidate must collect 120 votes from the committee members in order to become a candidate for chief executive.
– Each NC member can vote for at least two candidates or even all candidates.
– Each candidate can collect a maximum of 240 votes, which means that the uppermost number of candidates is ten.
– The top two or three candidates who get more than 50 percent of members’ votes can proceed to the public voting process.
– After the five million qualified voters in Hong Kong vote, the candidate who gets the most votes wins.

Since the members of NC are considered Bejing-manipulated, the proposal is not accepted by most HK citizens; some call it “fake democracy.”

Beijing and Hong Kong authorities, as well as the pro-establishment camp, have tried everything to lobby the pan-democrats to support the proposal. At the beginning of January, Chief Secretary for Administration Carrie Lam Cheng Yuet-ngor spoke of persuading at least four pan-democratic LegCo members to vote for the proposal.

Earlier this month, a list of 14 pan-democratic LegCo members whom the government would try to persuade was released. If the government could successfully lobby four votes – what has come to be called the “prize votes” – from the pan-democrats, the political reform plan would be passed.

Lam recently called in some pan-democratic LegCo members, meeting with the Democratic Party for half an hour and the Civic Party, which has the toughest stance on the reform, for 15 minutes.

Hong Kong citizens are concerned about who, among the 27 pan-democrats in the LegCo, might turn around and support the government.

LegCo member Joseph Lee Kwok-long was rumored to be one of the four pan-democrats who would change his stance to vote for the government. Lee did not commit himself to the rumor, but replied: “[The rumor] is from others, not from me. You should ask the person who started it.”

Another LegCo member, Charles Peter Mok, said there is no such thing as the “prize votes,” the government tries to use mention of that to persuade pan-democrats.

“It’s all lies,” Mok said. “In fact, it purposely misleads people to think that we could be persuaded, that we were intimidated, weakened, and split. These are all illusions created by the government.”

He declared many times that he would not accept the proposal drafted under the framework set on Aug. 31 last year by the National People’s Congress Standing Committee in China.

In this “8/31 resolution,” it was proposed that Hongkongers will be able to elect their next Chief Executive in 2017 through universal suffrage, but they can only choose from a small group of Beijing-screened candidates.

Mok said that a businessman in a suit advised him never to change his stance.

“Many of these people have business in China and know what went wrong. They are aware that once we adopt the proposal, it’ll haunt us for a lifetime,” Mok said.

Many of his friends in the business sector have also advised him not to vote for the proposal. “Though China is changing, we can’t let go of them. We need to pressure Beijing to grant Hong Kong true universal suffrage with no screening,” Mok said.

Another rumored target for a prize vote is Peter Cheung Kwok-che. However, Cheung said it has nothing to do with him, and that he has made it clear previously that he will veto the political reform proposal under the 8/31 framework.

He said he would only accept the proposal if it included no screening mechanism and one vote per person.

LegCo member Ip Kin-yuen said he would also veto the proposal. As to being considered a prize vote target, he replied that it was not his problem; it was others who had this wrong impression.

“Most importantly, we demand true universal suffrage with no screening,” Ip said.

LegCo member Ronny Tong from the Civic Party said he felt humiliated by the rumor that he would change his stance to support the government.

Tong said he would veto the proposal “because once it is vetoed, it will be a small victory for the pan-democrats.” He added that after the proposal is vetoed, there will still be a chance for universal suffrage.

“I hope Beijing will abolish the functional constituency in 2020, which is the only way to achieve true universal suffrage of Legislative Council members,” Tong said. He said the nomination threshold of the chief executive election should be set to a reasonable level, and the composition of the nominating committee should be democratized.

Alan Leong Kah-kit and Emily Lau Wai-hing also said they would veto the proposal. Leong said, “Our only right as the powerless is to safeguard our intention and continue to maintain dignity, refusing to confound right and wrong.”

In response to Chief Secretary Lam’s remark that once the proposal is announced, the government will launch a large campaign to promote it in communities, Lau said the Hong Kong government exploits airwaves to do one-way promotion, but never listens to the public will.

“They are doing it excessively every day, but they never allow us to make a move. It’s hypocritical and ridiculous,” Lau said.

She said the pan-democrats would start an anti-political-reform-proposal campaign on Sunday.

The Hong Kong people’s demand for true democracy has drawn international attention. On April 10, the U.S. State Department announced the Hong Kong Policy Act Report, which mentioned the framework of the Aug. 31 decision and the tear gas the police used against unarmed citizens during the Occupy Central protests for democracy.

The report also noted that election from multiple candidates can enhance the acceptability of the Hong Kong Chief Executive, push Hong Kong’s constitutional development forward, and consolidate the stable prosperity of the city-state.

As Hongkongers oppose the political reform proposal, international China affair commentators have frequently brought up the topic of the imminent collapse of the Chinese Communist Party and its impact on Hong Kong.

Professor of international relations at George Washington University David Shambaugh predicted in his Wall Street Journal article “The Coming Chinese Crackup” that the ruling of the Communist Party has come to an end.

The article listed five pieces of evidence of the Party’s collapse, including massive capital flight, the immigration of the wealthy, political suppression, distrust within the Party, and bribery and corruption in the government and military.

Benny Tai, associate professor of the Hong Kong University Faculty of Law and co-organizer of the Occupy Central movement, wrote earlier that if the Party collapses, the democratic practice in Hong Kong should be able to help China move toward genuine constitutionalism.