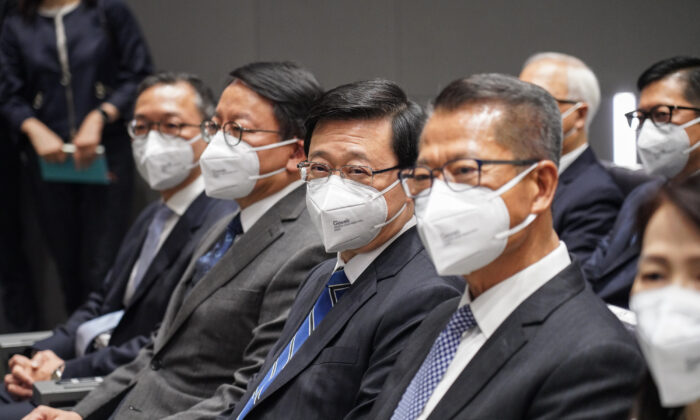 Haizhong Ning
Haizhong Ning was a state employee and worked for a real estate company in China, before moving abroad and working as a reporter with a focus on Chinese affairs and politics for more than seven years.
View profile
Follow
biggersmaller
Print

On the morning of June 19, Beijing appointed 26 new principal officials to the Hong Kong government, the sixth government since the handover, to take up office from July 1.

On the same day Chief Executive (CE) elect John Lee Ka-chiu led his new troupe of officials to meet the press. Four of the principal officials are sanctioned by the U.S. government, including Lee himself. Public opinions indicate that people from the commercial sector are not too keen to join the new government, one of the reasons is because of the risk of being sanctioned by other countries.

The position of the right-hand man, Chief Secretary-designate for Administration, will be taken by Eric Chan Kwok-ki, which means the next government in Hong Kong will be led by two former disciplinary services officers.

Radio Free Press (RFI) quoted Ivan Choy Chi-keung, senior lecturer in the Department of Politics and Public Administration Policy at the Chinese University of Hong Kong, and said “More discipline forces have entered into office, while administrators are leaving. Somehow, this is Beijing compromising: by appointing a former Secretary of Immigration Eric Chan Kwok-kei to be the right-hand man, instead of the previously rumored choice, Chris Tang Ping-keung, the current Secretary of Security.

Adding former Commissioner of Correctional Services Woo Ying-ming, to the position of Secretary for Anti-corruption, a total of eight key principal officials are from disciplinary forces.

Choy also pointed out that in Beijing’s eyes, the chief secretary for administration is someone who has the opportunity to take over the position of the chief executive. So whoever it is must be loyal to Beijing. Having both Eric Chan and John Lee as the two top leaders of the city shows that although Lee emphasized the development of an inclusive government, the Hong Kong government will still play rough and tough against Hongkongers in the next five years.

Li believes it is worth noting the appointment of former Commissioner of Correctional Services Woo Ying-ming, as there has never been a retired correctional services officer being posted as a principal officer in the government. Li describes that Woo is the first to break that pattern.

Sun Dongcheng, an immigrant to Hong Kong, also known as a Hong Kong drifter, becomes the first Mandarin-speaking official in the Hong Kong government. Born and raised in China, this “New Hongkonger,” despite having been in Hong Kong for over 20 years, Mandarin remains his primary language.

Sun is the first Putonghua legislator and official in the history of Hong Kong governance, but maybe this is the trend for the future.

Li Wei-ling mentioned, “ The Hong Kong and Macao Affairs Office issued a statement, describing John Lee’s office as an aggregation of “people from all walks of life,” with “Old Hongkongers” and “New Hongkongers.”

Li thought the emphasis on “New Hongkongers” suggests that we can expect more of them to join the Hong Kong government in the future.

Sun, having been in Hong Kong for almost two decades, can understand Cantonese, but practicing speaking it will be in his plan.

Commentator Li believed that compared to Sun insisting on speaking in Mandarin after being elected to the Legislative Council, Sun’s sentiment this time around seems to be his attempt to deliver a gentle message to Hongkongers as the new team settles in.

Officials Sanctioned by the US

Four members of the new government have been sanctioned by the United States. While many believe that the risks of being sanctioned are still quite high.

After the 2019 immense anti-extradition movement in Hong Kong, the Chinese Communist Party (CCP) slammed The Hong Kong National Security Law onto Hong Kong to clamp its objections. The United States responded and released the first round of sanction lists in August 2020, including 11 Hong Kong and Beijing officials.

Seven of the 11 are members of the Hong Kong Government, four of whom will remain in the new Government, including John Lee himself, Chris Tang, Secretary for Security, Erick Tsang, Secretary for Constitutional and Mainland Affairs Bureau, and the current Chief Executive Officer, Eric Chan, who will serve as the new Chief Secretary for Administration from July 1, 2022.

When asked whether Lee was responsible for recruiting the members of his new team, or the CCP agencies in Hong Kong had given their opinions, John Lee Ka-chiu’s response was, “The officials I chose are the ones I have chosen.” His questionable statement caused people to talk. Commentator of current affairs, Poon Cheuk-hung believes Lee’s statement could be about anything: that it’s unlikely Lee picked every important official on his own. Lee might have picked some of them, but perhaps not all.