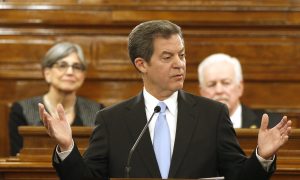 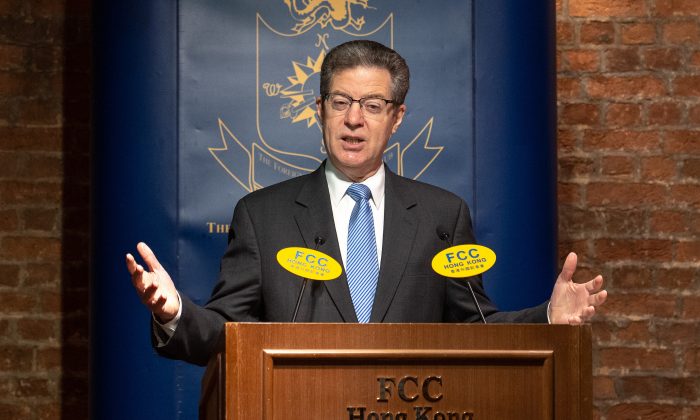 In his speech, Brownback called on Beijing to end all forms of religious persecution in China, saying, “The Chinese government is at war of faith. It is a war they will not win.”

He mentioned the human rights abuses perpetrated on persecuted groups such as Catholics, Muslims, Tibetans, and practitioners of the spiritual meditation practice Falun Gong.

According to the Hong Kong bureau of The Epoch Times, several political heavyweights attended the event, including Kurt Tong, consul general of the United States to Hong Kong and Macau; Martin Lee, founding chairman of Hong Kong’s Democratic Party; and Dennis Kwok, a member of Hong Kong’s legislative council and a founding member of the local Civic Party.

Days before Brownback gave his speech, Hong Kong-based media Apple Daily did report on the upcoming event. At the time of writing, however, Apple Daily has not published a subsequent report covering the speech.

With other Hong Kong media remaining silent, the Hong Kong bureau of The Epoch Times was the only local media to have reported on Brownback’s speech. The English-language Epoch Times also provided international coverage.

Beijing is known to strictly control media coverage inside China, and there are signs that Beijing’s influence is increasingly creeping into Hong Kong.

Hong Kong, a former British colony, returned to Beijing rule in 1997 under a “one country, two systems” principle, which guarantees the special administrative region a high degree of autonomy and freedoms, including freedom of the press.

But post-1997, Beijing has not kept in line with the principle. In recent years, following the pro-democracy Umbrella Movement of 2014 garnering worldwide attention, the Chinese regime has cracked down further on democracy activists and the press.

In October 2018, the Hong Kong government refused to renew a work visa for Victor Mallet, the Asia news editor of the Financial Times, who also served as the vice president of Hong Kong’s Foreign Correspondents’ Club.

British Foreign Secretary Jeremy Hunt called the visa rejection “politically motivated.” The Financial Times, in an editorial published that same month, said the incident highlighted “Beijing’s tightening grip on the territory and the steady erosion of basic rights that are guaranteed in Hong Kong’s laws and international agreements.”

This time around, Hong Kong media may have been treading carefully because Brownback mentioned the plight of Falun Gong—a topic considered taboo in China.

Falun Gong, also known as Falun Dafa, is a spiritual discipline that grew in popularity during the early 1990s. The number of adherents embracing its moral teachings and meditative exercises totaled more than 100 million, according to official estimates.

The popularity was quickly viewed by then-Chinese Communist Party leader Jiang Zemin as a threat to his rule. In July 1999, Jiang launched a nationwide persecution of Falun Gong adherents.

Since then, hundreds of thousands are estimated to have been arrested and detained within prisons, labor camps, and brainwashing centers, while thousands have reportedly been killed due to torture, according to Minghui.org, a U.S.-based website that tracks the persecution of Falun Gong in China.

Hong Kong residents are not optimistic about the city’s media landscape. The University of Hong Kong, published a survey in September 2018 in which it found that 56 percent of those polled believed the city’s local media practice self-censorship, a record high since 1997.