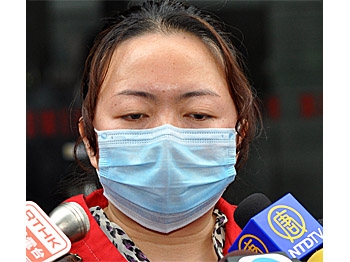 They filed a writ at the Small Claims Tribunal to seek compensation from the Fonterra Cooperative Group, Sanlu's second largest shareholder, which is registered in Hong Kong.

Chen Lu, the only one of the eight parents who was able to travel to Hong Kong, was accompanied by her attorneys Peng Jian and Lin Zheng for a hearing on May 4. According to Chen, her daughter, who is now 3 years and 9 months old, had been drinking Sanlu's milk since she was born in 2006. Several months later her child began to have swollen eyes and joint problems. When the tainted milk scandal erupted in September 2008, her daughter was diagnosed with multiple kidney stones.

Twenty-six days later their doctor told her that her daughter was completely healed and asked her to sign a settlement agreement for compensation of 2,000 yuan (US$300) to be provided by authorities. The very next day Chen found out that she had been deceived.

Chen said, “The doctor told me that my child was completely recovered, and there would not be any aftereffects. I believed them and signed the compensation agreement. The next day I took my daughter for a follow-up checkup and found out she still had stones in both kidneys. I could not accept that.”

Chen had sought treatment at numerous hospitals but without success. “My child often has fevers close to 110 degrees Fahrenheit and sweats profusely. The doctors told me she has a calcium deficiency,” she said.

Chen stressed that money was not the point. She wanted society to pay more attention to the children who have developed kidney stones from drinking the tainted milk. “I hope more medical experts can provide better education and treatment methods and help these children in the future,” Chen said.

According to attorney Peng, Sanlu had filed for bankruptcy and was not liable for compensation. Recently they found that Sanlu's second largest shareholder, the New Zealand- based Fonterra Group, is registered in Hong Kong, and they decided to come to Hong Kong to file a lawsuit. The amount of compensation they seek is not high, and hence they filed the lawsuit at the Small Claims Tribunal. Their case was accepted on April 8.

Peng pointed out that the Fonterra Group had known about the tainted milk as early as August 2008 and did not report it to Beijing authorities until six weeks later. “Being the second largest shareholder who knew the facts, Fonterra had the obligation to inform consumers. I believe the company is liable for the tort of negligence,” Peng said.

Peng said that since part of Fonterra's income came from Sanlu (US$6.6 million in 2007 alone) it is only natural that Fonterra should be liable for the compensation after Sanlu's bankruptcy. “Fonterra's profits caused the victims' pain. Now that Sanlu is incapable of clearing its debts, Sanlu's beneficiaries and shareholders should be liable,” Peng said.

Fonterra's General Counsel David Matthews flew in from New Zealand to attend the May 4 hearing. Outside of the court, Matthews stated that the tragedy happened in China and was compensated there. Furthermore, he said he didn’t think the Small Claims Tribunal was suitable to process such cases.

Peng thinks otherwise. Based on the principle of territoriality, “[Fonterra] is registered in Hong Kong and the case should be processed here. Otherwise criminals will come to Hong Kong to register their companies,” Peng said.

The trial will resume on May 25. The judge asked the plaintiffs to have doctors’ reports ready. Peng said his firm is handling over 200 similar cases. Once this case has succeeded, there could be more people coming to Hong Kong to file for compensation.

Information of melamine-tainted milk produced by Sanlu was first exposed by Fonterra. According to official statements, about 300,000 children in China became sick from drinking the tainted milk and six of them died. Nonofficial findings have reported much higher numbers of deaths. According to Peng, his lawyer group alone is handling cases of seven infants who allegedly died from drinking the milk.

In November 2009, Zhao Lianhai, a Beijing resident whose son developed kidney stones after consuming melamine-tainted milk powder, was arrested and charged with “inciting social upheaval” because he demanded medical help for his child and also assisted other parents who were unhappy with the way the government handled their cases.

Zhao had his first court appearance on March 30, 2010 at the Daxing District Court in Beijing. The trial was closed to the public, including his wife, and no verdict was announced at the conclusion of the trial. During the entire five-hour proceedings Zhao was kept shackled at the ankles.

Melamine-laced milk powder has been one of the biggest and most tragic toxic food scandals in China to date. Melamine is an industrial chemical that makes milk appear to have higher protein content. The milk powder was sold widely in China and caused tens of thousands of children to fall ill with kidney-related problems.