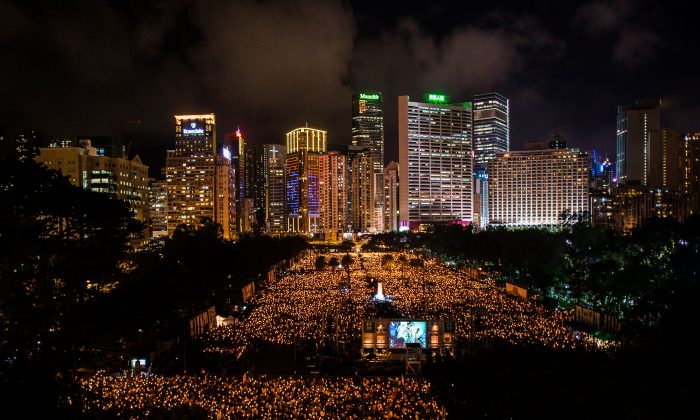 An estimated 180,000 people gather in Hong Kong's Victoria Park for a candlelight vigil memorializing the victims of the Tiananmen Square massacre and calling for the overthrow of the Chinese Communist Party, on June 4, 2014. (Phillipe Lopez/AFP/Getty Images)
Hong Kong

Hong Kong's example could trigger the collapse of the CCP dictatorship

Hong Kong’s system of freedom has made its 1997 return to the People’s Republic of China a nightmare for the Chinese Communist Party.

On July 1, 1997, the United Kingdom handed over Hong Kong, known as the “Oriental Pearl,” to the People’s Republic of China (PRC). Guarantees were made in the form of the doctrine “one country–two systems,” as set forth in Hong Kong’s Basic Law, a constitution negotiated prior to the handover.

“The socialist system and policies shall not be practiced in the Hong Kong Special Administrative Region and the previous capitalist system and way of life shall remain unchanged for 50 years,” reads Article 5 of the Basic Law.

Those institutions of freedom have been a great gift. Among other things, Hong Kong’s British-style judicial system has enabled Hong Kong to become one of the world’s three major international financial centers, running neck and neck with New York and London.

The seed of freedom planted in Hong Kong is likely to become a towering tree and benefit the entirety of China with its shade.

On June 4, 2014, the 25th anniversary of the Tiananmen Square massacre, the Hong Kong Alliance (Hong Kong Alliance in Support of Patriotic Democratic Movements of China) held its annual candlelight vigil in Victoria Park.

Over 180,000 people participated in the event, the largest number in history. The Hong Kong Alliance called on the people to join hands, vindicate the June 4 democracy movement, and end the CCP’s one-party dictatorship.

On June 10, less than one week after the vigil in Victoria Park, the Chinese State Council Information Office published a 23,000-word white paper on the one country–two systems policy in Hong Kong, the first white paper on Hong Kong since the transfer of sovereignty.

According to the white paper, China’s central authorities have “complete jurisdiction” over Hong Kong. However much authority the CCP grants the Hong Kong Special Administration Region is however much Hong Kong enjoys.

The CCP’s white paper is Article 23 brought back to life. In 2002, the CCP attempted to pass an anti-sedition law, a proposed addition of an Article 23 to the Hong Kong Basic Law. Hong Kongers believed Article 23 would effectively strip them of their basic rights and turned out in huge protests, after which the bill was withdrawn.

This year on June 20–22 the Hong Kong people will be able to vote in an online referendum for universal suffrage and the direct election of Hong Kong’s chief executive. On July 1 there will be a grand march calling for democracy in Hong Kong.

These events, and the giant June 4 candlelight vigil, do not demonstrate the “patriotism” the Party demands. And so, terrified of these developments, the CCP sought to intimidate the Hong Kong people with its white paper.

There is also one more thing that has terrified the CCP.

Taiwan’s Sunflower Revolution, which took place between March 18 and April 10, defeated the trade pact that would have given tremendous leverage to the CCP over Taiwan. The political freedom demonstrated by the students’ protest also caused a butterfly effect, as silent repercussions have rippled throughout the region and China.

The Sunflower Revolution, the June 4 candlelight vigil, June 22 referendum, and the July 1 grand march are serious, mass displays of political freedom by the citizens of Hong Kong and Taiwan.

If the power of example of these events radiates from Hong Kong toward mainland China, then it may reignite the mainland citizens’ passion and willingness to participate in a movement for political freedom. Another large-scale movement like the Democracy Movement of 1989 could result. For the CCP, this is a life-threatening political crisis.

In today’s Internet age, with the widespread use of mobile Internet devices, if such thoughts spread in mainland China, mainland Chinese can demand that the CCP step down through grass-roots, organized voting events. This might trigger a sudden transformation in China’s political system.

Once a strong social interaction mechanism is formed, it will tear up the CCP’s authoritarian system of strict control from within.

During this era of new technologies, the great forces for social justice are quickly gathering. If the Fifty Cent Party—the minders hired to guide Internet conversations—decide to defect and stop censoring users, if microblogging messages of “Quit the CCP” start to circulate everywhere, then the end of the CCP’s totalitarian rule will come.

At the beginning of the Cold War, East Germans flooded into West Berlin, drawn by the freedom there. The Soviet Union could do nothing but build a wall, lay down barbed wire, and set up watchtowers. Some brave souls continued trying to escape, and some were gunned down for trying.

But the power of the example of freedom in West Berlin could not be walled off and worked continuously on the hearts of those behind the Iron Curtain. In late 1989 waves of mass protests rocked East Germany and on Nov. 9, the Berlin Wall fell.

Hong Kong is China’s West Berlin. It is under siege today, but the power of a white paper cannot overcome the human heart’s yearning for freedom.

Translated by Cheryl Chen and Albert Ding. Written in English by Stephen Gregory.