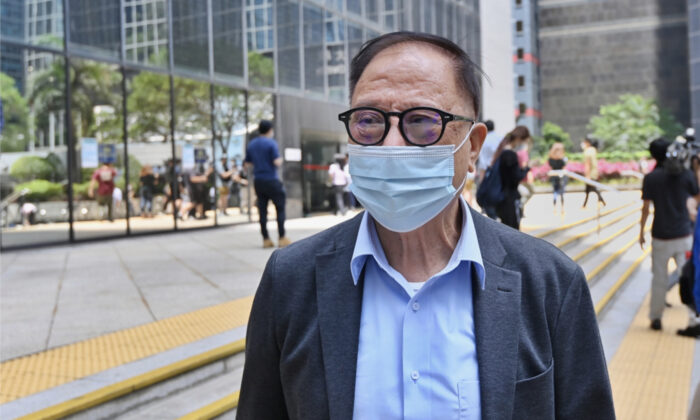 HKGov recently revoked the honors and the JP titles of three pro-democracy activists, who were all sentenced to more than a year in prison for participating in social movements. Photo shows Yeung Sum, former Democratic Party Chairman. (Song Bilong/The Epoch Times)
Hong Kong

The Hong Kong government recently revoked the honorary merits of three pro-democracy activists and their titles of Justice of the Peace. All three persons were sentenced to more than one year in prison for participating in social movements.

Some scholars believe that after the handover, the system of Justice of the Peace, and the honorary awards system have gradually become a “political candy hand-out system.” You have to side with the government to be awarded.

On the same day, Chief Executive Carrie Lam used her authority to revoke the appointments as “Justice of the Peace” from Yeung and Sin, effective immediately. However, the Gazette did not explain why.

Yeung Sum sent a letter to party members and media outlets in regards to the revocation, stressing the fact that he had defended the rights to peaceful assembly and demonstration in Hong Kong, which is both honorable and conscientious.

The 74-year-old pan-demo activist did not regret it in the slightest. Even though his title and medal have been stripped due to his involvement in social movements, as well as being accused of violating the Public Order Ordinance for defending those rights. Yeung had no plans to appeal the decisions of the title revocation.

In an interview with Epoch Times, political scholar Benson Wong Wai-kwok said that Yeung’s response was very fitting, “Under the current leadership of the Hong Kong government, being given an honorary title not only is a disgrace, it is also a humiliation, simply because it is presented to you by a regime that is not recognized, credited, or approved by general public opinion at all,” Wong emphasized.

Looking into previous records, Yeung Sum was awarded the Silver Bauhinia Star by Hong Kong government in 2009. The then chief executive was Donald Tsang Yam-kuen.

The government had high praises for Yeung. It recognized Yeung’s work as being exceptional in both public and social services. His commitment to fighting for the well-being of the disadvantaged was evident. Yeung had given a lot of invaluable advice and contributions to livelihood issues in society.

Yeung acted and strengthened the bridge of the communication between communities and the government, while he was in various public positions.

Sin Chun-kai, on the other hand, was also awarded the Silver Bauhinia Star in 2007.

Both Yeung and Wong were appointed the title Justice of the Peace.

Professor Benny Tai Yiu-ting was awarded the Medal of Honor by the Government in 2001, in recognition of his undeniable contributions to promoting civic education in the Basic Law and human rights. The Chief executive at the time was Tung Chee-wah.

The Hong Kong government never mentioned the reasons why the three influential civil figures were stripped from the titles of Justice of the Peace or why their medals were revoked.

Under the Justice of Peace Ordinance, A JP’s title can be revoked if he/she is sentenced to imprisonment both locally and internationally.

Yeung Sum and Sin Chung-kai were sentenced to jail due to participating in 2019 rallies, while Professor Tai was also sent to jail for initiating “Occupy Central” and publishing an advertisement for the “ThunderGo Project” in 2016.

Not long ago, former Director of the Bureau of Civil Affairs, Patrick Ho Chi-ping, was convicted for corruption and money laundering by the U.S. Southern Federal District Court of New York and sentenced to three-year imprisonment.

However, the Hong Kong government did not rescind his title of Justice of the Peace or his medal of Gold Bauhinia Star.

Political scholar Wong Wai-kwok pointed out, that based on the Ordinance, regardless of whether you have committed a crime in Hong Kong or overseas, anyone who is convicted should receive the same treatment.

Wong urged the government to explain the real reason behind the revocation of the medals and appointment of Justice of the Peace from the democratic figures.

Side with The Political Power  to be Honored

At the beginning of the city’s opening, the British government introduced the Justice of the Peace (JP) System in Hong Kong, and enacted an ordinance in 1844, authorizing the Justice of The Peace to process summary offenses.

After the handover of sovereignty in 1997, the Justice of the Peace System was retained in Hong Kong.

Wong thought that it would seem as if the Chinese Communist Party was showing respect to Hong Kong’s “One Country Two Systems” initially.

Ironically though, the title appointment of JP and merit systems became a “political candy hand-out”.

Those who had received the honorary titles were mainly among pro-Beijing and pro-government individuals. That extended to people who were questioned, whether they had contributed anything at all to Hong Kong society; a few of the professionals and centrists became embellishments.

Since the Handover, a large number of pro-democracy legislators had been appointed as Justice of the Peace by the Hong Kong government, including Cyd Ho Sau-lan, former Labour Party Legislator, who had been on bail for violating the National Security Law, and Charles Mok Nai-kwong, former Legislative Councilor representing the Information and Technology Sector.

Historian Hans Yeung Wing-yu told us that Hong Kong at the time was still relatively objective politically. It was still a civic society. If someone had done a good job, then the government would recognise this by making an awarding.

In recent years, most who had been awarded leaned towards the pro-Beijing party, DAB, Democratic Alliance for the Betterment and Progress of Hong Kong.

Hong Kong civic society disappears, you no longer have to purely be someone who has significantly contributed to social affairs to be awarded. All you need to receive the honors is to be someone who is politically reliable and sides with the power.