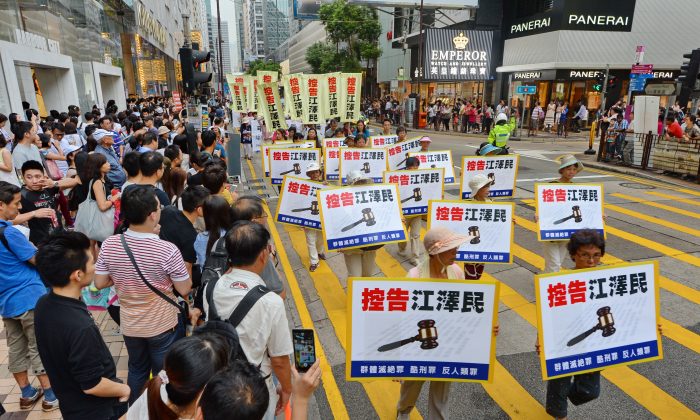 HONG KONG—Mr. Chen, a tourist from Zhejiang Province, couldn’t tear his eyes away.

It was a shocking revelation for him seeing 600 Falun Gong practitioners marching through the streets of Hong Kong. They were calling for an end to the Chinese Communist Party and for former party leader Jiang Zemin to be brought to Justice.

“There’s no such parade in the mainland,” he said.

Mr. Chen could hardly believe that people would publicly file lawsuits against Jiang and list his crimes. It took courage to do so, he said, as he watched the parade move through the street that day.

That was Oct. 1, the day the Chinese Communist Party marks the revolution that brought it to power 66 years ago. It was also the day that hundreds of Falun Gong practitioners gathered to hold a rally in Hong Kong, eventually taking to the streets in a parade.

Many well-known figures from Hong Kong and mainland China gave speeches to support the practitioners’ demands for justice and freedom.

Hong Kong Falun Dafa Association spokesperson Kan Hung-cheung said in his speech that since May this year, Falun Gong practitioners and their families have filed more than 180,000 lawsuits against former CCP leader Jiang Zemin. Jiang was responsible for launching the violent persecution against Falun Gong, a traditional Chinese spiritual discipline based on truthfulness, compassion, and tolerance.

In Hong Kong, about 30,000 signatures have been collected supporting those filing complaints against Jiang, Kan reported.

“Falun Gong practitioners’ firm demand is to bring the criminal Jiang Zemin to justice and stop persecuting Falun Gong,” Kan said. “This is the will of Heaven and is also the choice of conscience. We are pleased to see that more and more people have passed the test of conscience. They will become the hope of the future society.”

In a speech delivered via a recording, Taiwan Falun Gong lawyer spokesperson Teresa Chu said the use of state machinery to persecute Falun Gong has already spread deep into all areas of Chinese people’s life, even extending to Hong Kong, Taiwan, and overseas.

She said the large-scale atrocity of using live organ harvesting to kill Falun Gong practitioners is still happening in China. She appealed to overseas Chinese to seize this historic moment to file lawsuits against Jiang.

“If there were 100 million people or even more people suing Jiang… it would be certain to bring Jiang to justice,” Chu said.

Hong Kong Legislative Council member Albert Ho Chun-yan also gave a speech via recording. He said Oct. 1 was a sad day, because there are still many outstanding intellectuals and human rights lawyers in detention. Human rights lawyer Gao Zhisheng is still under residential surveillance, and Falun Gong practitioners are still being persecuted.

“Mr. Gao Zhisheng reported on the persecution of Falun Gong. He published three public letters to the previous Chinese President Hu Jintao, asking him to restore justice on this matter. After he was sent to prison, we did not see the end or weakening of the persecution,” Ho said.

“Live organ harvesting is still happening in many parts of the country,” he added. “These are extremely shameful crimes, awful crimes against humanity.”

Ho said the tens of thousands of people filing lawsuits against Jiang is an unprecedented phenomena.

“As long as there’s hope, persist at it. Justice is a must, and is bound to win,” he said.

Joseph Cheng Yu-shek, convenor of the Alliance for True Democracy, believes that the current wave of lawsuits against Jiang is a significant breakthrough.

“The leader of any country, no matter how high his position is, if he broke the law, if he did not respect human rights, he should be subject to legal sanctions. Through the legal path, Falun Gong are defending their basic human rights, exerting pressure on the Chinese government, and forcing them to carry out their commitment to governing the country by law. I think this is a significant breakthrough in the development of civil society,” Cheng said.

Bao Tong said that Jiang’s suppression of Falun Gong is “absolutely wrong,” and that for the dignity of the law, it is a must to file lawsuits against Jiang. Bao said the CCP system, which made this tragedy happen, should no longer exist.

Her mother and brother are in Sichuan, and both of them have been persecuted for practicing Falun Gong.

Liang’s mother was sentenced to a forced labor camp for one year, and her brother was arrested and sentenced to prison for three years.

Liang isn’t someone on the fringes of society. Like so many Falun Gong practitioners, she is solidly middle class, with a masters degree from the South China University of Technology.

After Jiang launched the suppression of Falun Gong in 1999, many outstanding professors and students in her university were jailed for their beliefs, she shared. Many, like her, had maintained their belief in the practice after experiencing tremendous mental and physical benefits.

After the rally, 600 Falun Gong practitioners from Hong Kong and other parts of Asia started the parade in Cheung Sha Wan in Kowloon. Led by the Tian Guo Marching Band, the parade passed though Mong Kok, Jordan, and other commercial districts and ended at Tsim Sha Tsui.

The parade and the distinctive appeal stunned mainland Chinese tourists. Mr. Gao from Jiangsu Province said with tears that he was envious. “What a shock! This could not happen in the mainland,” he said.

Mr. Li of the manufacturing sector said this was his first time watching a Falun Gong parade.

“You could not see this in China; it’s very shocking,” he said. “The parade is spectacular. I took some photos and will bring them back home to look at.”