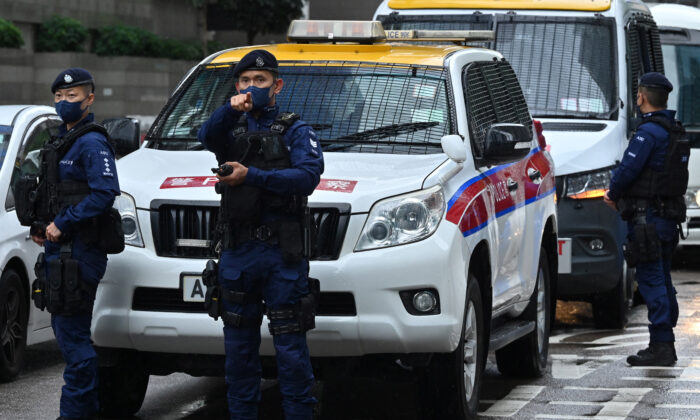 A special unit of the Hong Kong police provides security in the city's Wanchai district on June 30, 2022. (Peter Parks/AFP via Getty Images)
Thinking About China

Hong Kong’s national security police issued charges against a Canadian citizen and critic of the Chinese Communist Party, for subversion, under the National Security Law (NSL). It has also issued similar charges against two U.S. residents. Their crimes: political organizing (though entirely legal) outside of Hong Kong and China—in Canada and the United States, respectively—to be exact. With this, Hong Kong police show, once and for all, the true extraterritoriality concept behind the law passed in 2020.

No one can say they weren’t warned. I know because I drafted a report that issued such a warning earlier this year. In it, Safeguard Defenders took note that the then security chief, John Lee, and already then heir apparent to the mini-throne of Hong Kong, had been vocal about expanding the use of the law, and using “international instruments” to seek such “fugitives'” return to Hong Kong. This is the same man who said that Hong Kong “police would hunt down [Ted] Hui,” the former lawmaker in exile.

Lee, now the chief executive of Hong Kong, went further and said, “Fugitives who have fled overseas under charges related to national security will be pursued for life.” Not intent on letting anyone miss his strong words, he later said such people would “be pursued for the rest of their lives by the Hong Kong police.”

This is not the first time a foreign citizen has been named as wanted under the NSL. That has already happened to an American citizen, Samuel Chu, but for supposed crimes carried out while in Hong Kong. Others—from Danish and British democratically-elected members of parliament to NGO leaders to politicians—have been mentioned in language eerily similar, but without making it clear whether they are, or would be, charged under similar offenses.

Even though Lee noted that political circumstances might not always allow Hong Kong to use INTERPOL, extradition treaties, or mutual legal assistance treaties (MLATs), he said such circumstances would change. He went on TV to say, “[Those] who are currently ‘protected’ by foreign governments will become disposable when they are of no political value.” To drive home the point, he also said, “International relations are changing every moment … but we hold them criminally responsible for life.”

Despite the difficult political circumstances for Hong Kong police to use such international tools at the moment, it would not stop them from trying—another warning issued in the Safeguard Defenders report. “Hong Kong is a member of INTERPOL, and member countries or regions have an obligation to provide mutual legal assistance to each other in criminal matters.” Furthermore, “The Hong Kong police can make an offer of arrest to INTERPOL. If the absconder is on bail, then the court can also issue an international warrant.”

Shortly after, it became clear that Hong Kong had sought to use an MLAT with Denmark to gather information on two Danish MPs (Uffe Elbæk and Katarina Ammitzbøll). Hong Kong police also threatened a British NGO and its director with extradition and arrest shortly after. What must be fear-inducing not only to Hongkongers in exile, but now also to foreign citizens who carry out political activities counter to the interest of the ruling dictatorship in Beijing and Hong Kong, is that Hong Kong maintains such MLATs with a large number of countries.

Hong Kong also maintains its sub-bureau within INTERPOL, and the organization’s sloppy review process has already destroyed countless lives and could easily be used to do the same for Hongkongers. Worse still, a few select developed and democratic countries, to this day, maintain extradition treaties with Hong Kong, namely the Czech Republic and Portugal. All other democratic nations have since suspended such treaties. Yet, many still maintain them with mainland China—a country with much far-reaching, long-arm policing and a legal system that makes Hong Kong’s look idyllic.

Conclusions from Safeguard Defenders’ investigation into Hong Kong’s global policing of critics have already come true. Likely, Hong Kong’s attempt to use extraditions, MLATs, and INTERPOL is about to come true as well, as these developments merely follow the words of the new leader, John Lee. It’s high time for the Czech Republic and Portugal to stop being the soft underbelly of the democratic world in the protection of basic human rights for Hongkongers and critics of China, or they risk becoming black holes where neither Hongkongers nor Western politicians, NGO workers, academics, and even MPs can no longer travel without risk. Just the same, it’s high time to review MLATs, if nothing else, because Hong Kong authorities are now publically threatening to go after foreign critics abroad using them.