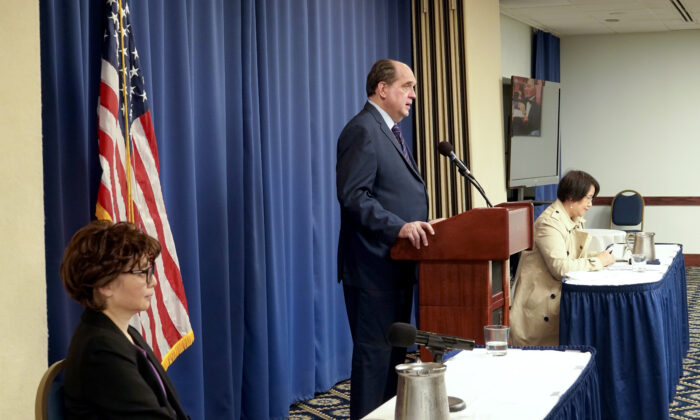 A day after a violent attack at the printing press of the Hong Kong edition of The Epoch Times, the outlet said it would never give in to intimidation, pressure, or sabotage attempts by the Chinese Communist Party (CCP), at a press conference in Washington on April 13.

In the early hours of Monday, four men broke into the printing warehouse of the Hong Kong edition of The Epoch Times. The perpetrators smashed printing equipment with sledgehammers and tossed construction debris on it before fleeing the scene in a white van. They threatened the staff onsite not to do anything that would compel them to take action.

The printing plant suffered extensive damage from the assault, which affected multiple computers, the transmitter, and a computer, and forced the Hong Kong edition to suspend printing for the time being.

Guo Jun, the director of the Hong Kong edition of The Epoch Times, said the attack was the latest in a long line of actions aimed at crippling the outlet.

“The Chinese Communist Party has used every trick in the book to suppress The Epoch Times in Hong Kong in an attempt to prevent the city’s people from getting independent news,” Guo said. “The Epoch Times is one of the few remaining voices in the Hong Kong media landscape that does not bend to the CCP.”

In November 2019, during the height of the mass pro-democracy protests in the city, four masked men broke into the same printing facility and set fire to the equipment. The arson resulted in an estimated damage of $40,000. The printing press has been targeted three other times since its founding in 2006.

While The Epoch Times Hong Kong will increase security measures, that in itself is not enough to counter the effect of declining press freedom, Guo said.

Since October last year, employees from the warehouse have been monitored by unknown vehicles, she said.

In March, a Hong Kong host of the outlet’s online current affairs programs received a message that mainland China police had delivered to her relative, that she should stop broadcasting or face arrest under the new National Security Law. Last July, the CCP imposed a national security law on the city that punishes vaguely defined crimes including secession and collusion with foreign forces, which critics say is a tool used to suppress dissent.

Guo vowed to resume publishing the newspaper by Friday, when a Hong Kong court will announce the sentencing of several key pro-democracy activists.

“We will not back down, and will never bow to evil forces,” she said.

Hong Kong police’s organized crime squad has taken over the investigation. In an overnight statement to AFP, the police said they received a report that the attack was related to a dispute over a debt.

“Police received a report saying that the suspects claimed the staff from the above company owed loans and used hammers to destroy five computer screens and one printer,” the statement said.

“The story we can say is a ruse, and most likely planted in order to deflect attention away from the obvious culprit here which is the Chinese Communist Party,” said Stephen Gregory, the publisher of the U.S.-based newspaper, in the press conference.

Guo confirmed that there have been no outstanding debts by the warehouse or the Hong Kong Epoch Times.

The police statement appeared to refer to a note left by the attackers at the scene, Gregory said.

“In order to gain access to the print shop, the first man who blocked the door demanded to see Mr. Chu, he wants to see Mr. Chu right away—there is no Mr. Chu who works in the Hong Kong print shop,” he said. Despite being told so by the woman he confronted, the man quickly let in three other attackers. The four later left a note that the police found asserting the debt claim, Gregory said.

Journalist watchdogs have called for the police to conduct a thorough investigation and hold the attackers accountable.

Police investigations into the previous attacks on The Epoch Times printing press have not brought meaningful results, Guo noted, calling for international support for the outlet to continue its mission.

What happened to the printing plant “allows the world to see what it means to live under the Chinese Communist Party,” Gregory said.