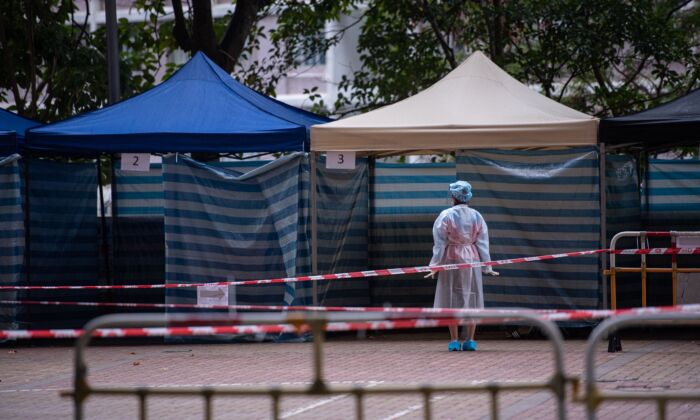 A health worker waits for residents to be screened for COVID-19 at a makeshift testing station outside a building placed under lockdown at the Kwai Chung Estate public housing complex in Hong Kong on Jan. 22, 2022. (Louise Delmotte/AFP via Getty Images)
HK Life

Hong Kong has asked civil servants to work from home “as far as possible” to rein COVID-19, a day after the Asian financial hub recorded a sudden surge in case numbers.

The city reported 140 new infections on Jan. 23 during the height of the fifth COVID-19 wave—a record high in almost 18 months since July 30, 2020—when nine more cases were recorded, authorities said during a daily press conference. On the previous day there were 26 cases reported.

About three-quarters of the locally-transmitted cases are reportedly linked to an outbreak at apartment blocks in Kwai Chung, a congested residential area on the Kowloon Peninsula. Thousands of residents there have been placed under lockdown and need to undergo testing daily.

In a Jan. 24 statement, a government spokesman announced a reduced flow of people in government buildings and offices, in a bid to contain the spread of Omicron.

“Such arrangements may include allowing some of their staff to take turns to work from home as far as possible,” the official said, adding that a temporary reduction in public services would occur.

Following Beijing’s “zero COVID-19” strategy, Hong Kong has so far shut schools, bars, gyms, and beauty parlors, while banning indoor restaurant dining after 6 p.m. and some air travel over the past weeks.

Last week, officials stirred a public outcry for ordering the killing of hamsters from dozens of pet shops after tracing an outbreak to a worker at a shop, and asked people to surrender any bought on or after Dec. 22 “as soon as possible.” The government described the outcry as “irrational.”

As of Jan. 22, a total of 2,512 animals, including 2,229 hamsters, had been “humanely dispatched,” according to a government statement. Only one hamster surrendered to authorities by pet owners had tested positive, authorities said on Jan. 23.