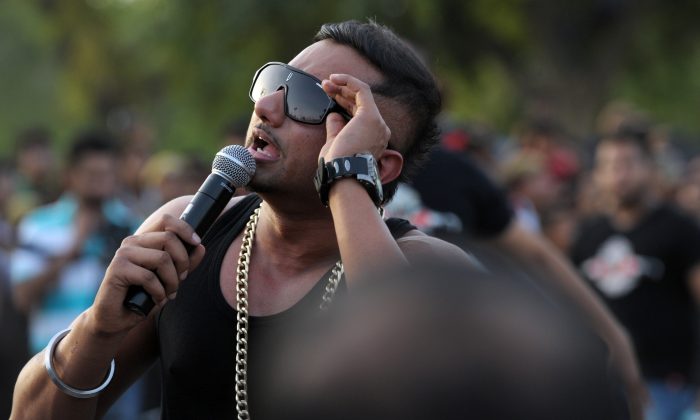 Honey Singh in a 2012 file photo. The rapper is not dead, despite rumors online to the contrary. (AFP/GettyImages)
Entertainment

Yo Yo Honey Singh, the Indian rapper, gave an interview about the death hoaxes about him that went viral this week.

Singh has continually attempted to dispel the rumors on social media.

He laughed about the death rumors in an interview with the Deccan Herald.

A person leaked a photo of him lying unconscious on a hospital bed, claiming he was died. The rumor said he died in a car accident.

However, he said he wants to start a boxing league in India in October.

“Film actors, sports persons, musicians, socialites, royalty and just personal friends…they were all here. I want this to be one of the biggest sporting events from India,” he said, according to reports.

He added: “My friends Shafiq, Zak D and Prince Aamir, we are all into boxing. We practice MMA (mixed martial arts) regularly. Ladna, koodna, khelna hamare khoon main hai. There are many wrestlers in my mother’s family. So, I guess I’ve inherited my love for wrestling from my mother’s side of the family.”

The rapper continued: “”In October, I’ll be bringing the GFC to India. We want to take boxing to the level of cricket. But for that, I need to give serious time to this endeavor. Luckily, I have a bank of 200 songs ready. So I don’t have to worry about where my next song is coming from.”