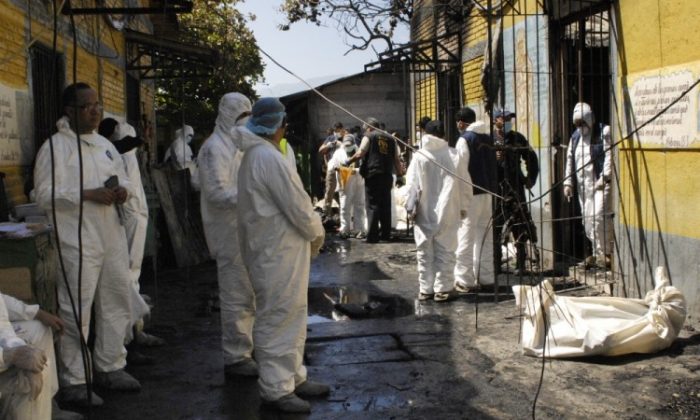 Forensic personnel remove the charred remains of inmates at the National Prison compound in Comayagua, Honduras, on February 15, 2012. (Orlando Sierra/AFP/Getty Images)
US

A fire at a prison in Honduras on Wednesday killed at least 272 inmates and left dozens unaccounted for in the worst tragedy of its kind in recent memory.

Honduras Security Minister Pompey Bonilla said that it is likely that more than 300 inmates were killed, but so far, only 272 deaths have been confirmed, reported the El Heraldo newspaper. The fire occurred overnight at a minimum security prison in central Honduras.

Prison officials told the newspaper that out of the 850 inmates in the prison, there are 347 still missing, but stressed that some may have escaped.

“It does not mean that everyone is dead,” Human Rights Commissioner Ramon Custodio noted.

Some witnesses said that several inmates were able to break through the roof of the facility and saw others escaping.

Danilo Orellana, the director of the country’s prison system, said that “most suffocated” in the fire, adding that it was “not a riot” that started the blaze, according to El Heraldo.

“A forensic team is coming [to investigate] and everything is still all very preliminary. The prisoners who were saved were in the courtyard,” Orellana added.

Outside the prison, relatives of the inmates clashed with police guarding the charred facility after trying to get inside, according to the EFE news agency. Police fired warning shots and threw tear gas canisters at the crowds of people, who were throwing stones. The crowd broke down a fence at the prison’s main entrance gate.

In Honduras, as well as Latin America in general, prisons are notoriously overcrowded. AFP reported that Honduras prisons only have room for 8,000 inmates but house more than 13,000.