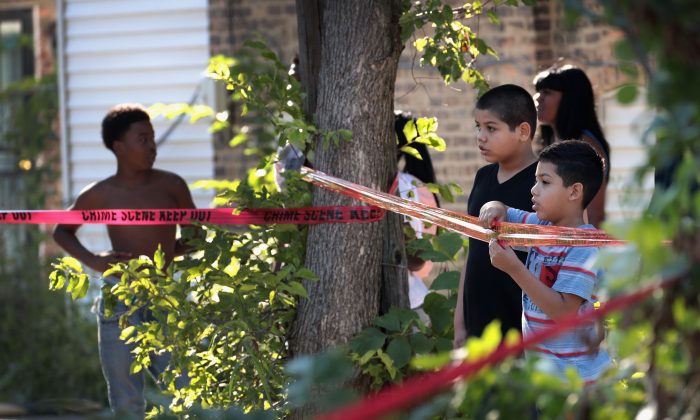 Residents watch as Chicago Police SWAT team members surround a house in the Humboldt Park neighborhood where they believe a man responsible for a nearby murder was hiding on July 27, 2017, in Chicago, Ill. (Scott Olson/Getty Images)
US News

The FBI just released the crime statistics for 2016 and they don’t look pretty. While property crime continues to diminish, violent crime is rising—especially murder.

This comes after the murder rate had been declining, with some hiccups, since the early 1990s. All the improvements achieved over the better part of the last decade have now been erased in just two years.

And it looks like the country hasn’t seen the worst yet. Midyear reports from 62 major cities show murders inching up by almost 3 percent in 2017 compared to the first half of last year.

“For the sake of all Americans, we must confront and turn back the rising tide of violent crime. And we must do it together,” Attorney General Jeff Sessions said in March. “The Department of Justice is committed to working with our state, local, and tribal partners across the country to deter violent crime, dismantle criminal organizations and gangs, stop the scourge of drug trafficking, and send a strong message to criminals that we will not surrender our communities to lawlessness and violence.”

The surge in murders was fueled mainly by some larger cities, most notably Chicago, where 784 people were killed last year. Memphis, Louisville, and San Antonio also experienced major increases.

The rest of the country, however, bears part of the rise too.

Notable exceptions are cities like New York City and Washington. While Washington is recovering from a murder spike in 2015, New York City continues a long-term trend of crime decline started in early 1990s. Murders are down over 23 percent in the city this year, compared to the same period in 2016.

One reason behind the violent crime increase is a slowdown in policing, according to Heather Mac Donald, a fellow at the Manhattan Institute, a conservative think tank.

“Police officers are still hesitating before they engage in proactive policing,” she said over the phone.

She blames such hesitance on an atmosphere of animosity toward police—a notion echoed by Sessions.

“Unfortunately, in recent years law enforcement as a whole has been unfairly maligned and blamed for the unacceptable deeds of a few bad actors,” he said in his Richmond speech in March. “Too many of our officers, deputies, and troopers believed the political leadership of this country abandoned them. Amid this intense public scrutiny and criticism, their morale has gone down, while the number of police officers killed in the line of duty has gone up.”

Sessions also linked the violence with the opioid epidemic, which is estimated to have dramatically intensified last year.

“Illegal drugs are flooding across our southern border and into cities across our country, bringing violence, addiction, and misery,” Sessions said. “We have also seen an increase in the trafficking of new, low-cost heroin by Mexican drug cartels working with local street gangs. As the market for this heroin expands, gangs fight for territory and new customers and neighborhoods are caught in the crossfire.”