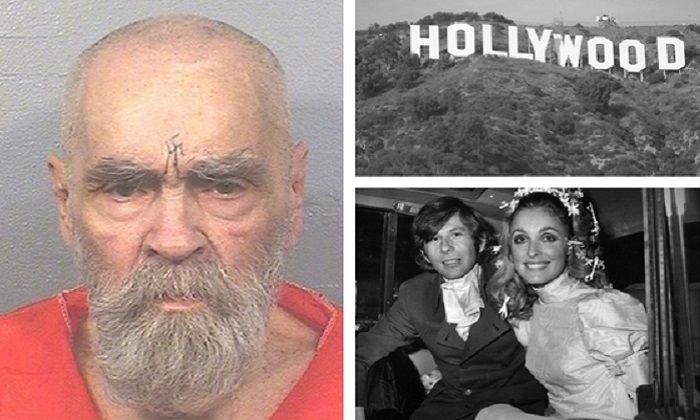 The most recent image of Charles Manson, taken in August (L) (Courtesy of the California Department of Corrections and Rehabilitation). Hollywood in Los Angeles (Top R). (Oreos via Wikimedia Commons CC BY-SA). Manson’s followers killed actress Sharon Tate (pictured with her husband Roman Polanski) in her Los Angeles Home along with four others on Aug. 9, 1969 (Bottom R). (Photo by Evening Standard/Getty Images)
US News

Charles Manson, the notorious cult leader who ordered his followers to commit a series of horrific murders in 1969, has died of natural causes aged 83.

After more than 45 years in custody, Manson passed away on Sunday evening, Nov. 19, at Kern County hospital, said a statement from the California Department of Corrections and Rehabilitation (CDCR).

Manson had been admitted to hospital earlier this week. Since being imprisoned in 1971, the CDCR said that Manson had been denied parole 12 times and that he was not eligible to have another parole hearing until 2027.

Leftist icon Charles Manson fell through the trapdoor and off the planet at the age of 83. pic.twitter.com/Jix0R6OYG0

In the summer of 1969, Manson devised a string of horrific murders in Los Angeles that captured the macabre fascination of the country. Under his commands, a group of his young followers–labeled the ‘Manson family’–carried out seven of murders on Aug. 9-10 of that year.

Manson hoped that the killings would be blamed on black Americans and start a race war after which Manson and his cult followers would come out of hiding and take power.

Among those killed were Hollywood actress Sharon Tate who was then eight months pregnant. The 26-year-old was the wife of director Roman Polanski who was overseas at the time of her death.

Tate was brutally killed in her Los Angeles home along with coffee heiress Abigail Ann Folger, Wojciech Frykowski, Jay Sebring and Steven Earl Parent who was the youngest, aged 18.

“People were so terrified because these seemed to be murders without a motive,” said lead prosecutor Vincent Bugliosi, who died in 2015, according to a report in the Los Angeles Times. “They weren’t robberies or burglaries. It was so random. If you’re not safe in your home, where are you safe? And these murders were particularly brutal. On the two nights there were 169 stab wounds.”

Manson was also convicted of first-degree murder over the July 25, 1969 killing of Gary Hinman and of Donald Shea on Aug. 26 that same year.

While Manson did not commit the murders himself he orchestrated his followers to do so.

For their crimes, Manson and three followers—Susan Atkins, Patricia Krenwinkel and Leslie Van Houten—were initially sentenced to death in 1971. But the following year, all capital sentences in California were commuted to life in prison as ordered by the Superior Court of California.