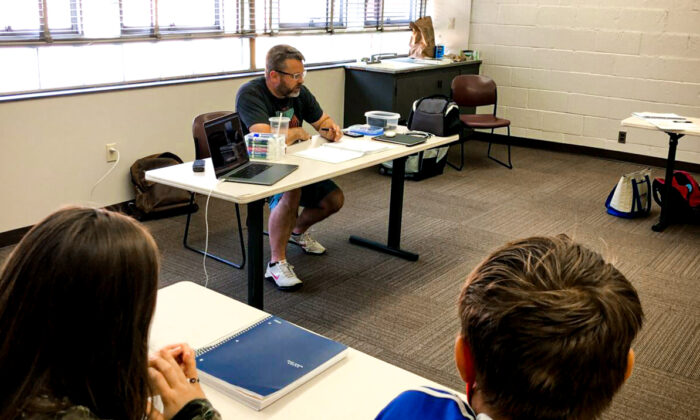 KETTERING, OHIO—It’s Tuesday, Sept. 14, and Brian Newell has 10 students in his high school-age class seated around a U-shaped table arrangement in front of him. He has one student on Zoom. He’s making a point, says something funny, and the class erupts. Within a minute, everyone is jumping in, gesturing, laughing.

Brian’s wearing a T-shirt, shorts, and popular sneakers with ankle socks. The students are dressed like typical teens: black T-shirts, ripped jeans, the only girl in the room is wearing a camo-style jacket. They’re discussing British literature—Chaucer’s “The Knight’s Tale”—and now one or more is dissing on another who spoke up.

These eleven teenagers seem like any group of teens, but these aren’t public school students—they’re homeschoolers.

They’re in an all-day co-op classroom setting, in Kettering, Ohio, held under the auspices of North Carolina-based Classical Conversations. And this is their routine: six subjects in a single seven-hour day, together in one setting on campus, and then they study at home the rest of the week, building off this foundation—except when they’re not at home. They might meet in small study groups, participate in local or high school sports, take music lessons, or be helping a younger brother or sister with their schoolwork.

This is the homeschool world, busting up one of the major stereotypes of the home-educated: the socialization critique that they don’t know how to be social since they’re kept at home all the time.

When Zach, a teen in the class, says that Emelye, the main female character from Chaucer’s work, has been treated by the two dueling males “like a sack of potatoes,” the class goes nuts with laughter. Minutes earlier, facilitator Newell had said what is only obvious: the two dueling knights are interested in Emelye for one reason: “She’s hot.”

Newell’s classroom fosters an engaging, lively setting. The students have a class “mascot”—Bob, a goofy-faced character—they’ve been using since the start of the year. One teen says the mascot represents “our happiness”; another, “our maturity.” It’s all good fun. But maybe that’s needed since the subjects they’re doing include algebra/geometry, Latin, British literature, logic, biology, and debate. Newell pulls to his classroom a wide, plastic tote filled with his electronics and about 10 textbooks. Most students lug something similar to the campus, which is a local church. But the group seems far from mere bookworms.

Joseph Rutan, of nearby Fairborn, is one of the more engaging in the class. Even though he’s homeschooled, he plays on his local public high school’s varsity soccer team, as a left wing, and sees significant action, which he did as a freshman (not often common in many Ohio high school sports). He talks easily about his class setting and friends. “I enjoy the openness of it,” Joseph said. “No one’s afraid to laugh or say what they think.”

He was asked about the homeschool socialization critique. “I think homeschoolers can achieve as much as anyone else—they can go after their dreams.”

“Colleges are continually glad to have homeschooling students,” said Karen M., of the Dayton area, a national educational consultant who has taught individual classrooms, directed homeschool campuses, and is a state-certified assessment expert for homeschool families. She’s also helped families learn to home educate in countries like Ghana, Thailand, and Indonesia. Because her work is ongoing internationally, Karen asked that her full name not be used for this story.

She taught in public schools for fifteen years before realizing something wasn’t right. “I’d be in the teachers’ lounge and teachers would just be so negative about parents and students,” she said. “There was such an atmosphere of distrust [of families].” To escape the negativity, she would go to another area just to eat her lunch.

Karen has a master’s degree in educational psychology. In too many public school settings, she said, she has observed teachers “just pouring out their knowledge into kids, like kids are empty vessels, just supposed to receive all this. That really just fosters disrespect of students, of the individual, of the whole person.” She calls true education, by contrast, “the science of relations”—students learning to interact with those of various ages.

Cara Letcher is the only girl in Newell’s physical classroom. (One other girl is on Zoom.) She more than holds her own. “I think we all like stating our opinions, but we accept each other’s opinions,” she said. She’s one of four siblings who have been homeschooled. She’s a high-level gymnast (11 years) who specializes in floor exercise. She said the structure of the Classical Conversations format “has taught me good time management. I have to have good management. I’m in the gym four days a week, and work there two other days, so that’s six days a week, along with school and everything at home.” Her co-op uses study groups and group chats on text to help each other during the week, she said.

Kim Buinicky and her husband Jay are what some might say are among the pioneers of the homeschool movement; they’ve homeschooled four, taking their first child out of public school when he was in second grade in 1989. She had taught him his letters, numbers, and colors as a young one at home, she said. But by second grade the public school said he was having behavioral problems. “It turns out, he was just bored,” she said of her son, a licensed drone pilot today. “I said to myself, ‘Oh my, this can’t continue.’ We took him out and took him home. And though we took it a year at a time, we never looked back.”

Asked about the socialization argument, Buinicky said, “I think it’s ironic. I mean, everyone is socialized. It doesn’t matter what age kids are. We all get socialized in one way or another. In most public schools, kids are with kids exactly their age all day long. But life isn’t like that. You work with different people your entire life.” She is saying this as children of various ages mix in a gymnasium playing basketball during the co-op’s lunch break.

Cesar and Carlos Alvarez are two years apart in age but both in Newell’s co-op class. Their father is active in the U.S. Air Force, and they’ve moved from Germany to Colorado to Dayton during their homeschool years. They’re training to be interpreters for the public at a local Wright Brothers historical site. “When I was in public school [up to third grade], the teacher would mostly just tell us stuff,” Cesar said. “I mean, you could ask some questions. But it was mostly just listening. I was a little bored there.”

Why does the homeschool socialization critique exist? Karen sees two primary reasons: parents are seen as somehow “not qualified,” when many are professionals, have college undergrad degrees or higher, and have extensive life experience; and, “for some reason—and I’m not sure why—a lot of people think children are sent to school to learn how to socialize. But then they’re locked in the same educational setting all day with 25 or 28 of their peers of the exact same age. It’s the actual opposite of socialization.”