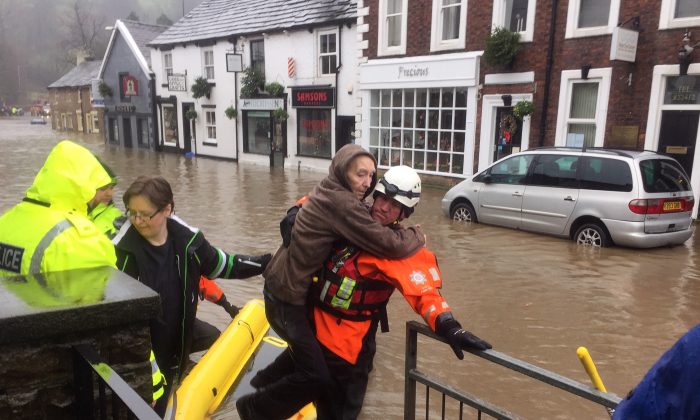 A man is helped by a rescue team in Whalley, Lancashire, England, Saturday Dec. 26, 2015. (Kim Pilling/PA via AP)
Europe

LONDON—Homes were evacuated, cars were submerged and boats were brought in to help bring people to safety Saturday as parts of England, Scotland and Wales faced severe flooding caused by repeated heavy rains.

The Boxing Day holiday saw a battle against the elements, particularly in northwestern England. More than 30 “severe” flood warnings were issued — each one meaning people faced possible loss of life if they didn’t exercise extreme caution.

In the county of Lancashire, some 220 miles (350 kilometers) northwest of London, emergency workers backed by the military buttressed defenses with extra sandbags and heavy trucks brought in rescue equipment able to drive through waters too high to safely traverse on foot.

Hundreds of people were evacuated from their homes after water breached flood barriers and poured into the streets.

Beleaguered residents in some towns were told to abandon their homes for higher ground while others were told to move their valuables and listen to advice from emergency services about possible evacuation.

Abbi Blackburn, stranded, said she had no sandbags to protect her home and had already lost major appliances to flooding in the basement. She said it was too dangerous to leave either on foot or in a vehicle.

“It’s getting quite bad and it’s still walloping down with rain,” she said.

Texas Storms: Death Toll up to 5 From Flooding

Lancashire police tried to persuade the curious to stay away from the danger zones: “A severe flood warning means danger to life. It doesn’t mean ‘come and have a look,'” the department tweeted.

Its fire department reported one fire station had been evacuated due to floods but that its boat crews and “swift water rescue” crews were helping others to safety.

Authorities issued some 335 flood alerts in all. The government’s emergency response team convened by telephone to coordinate rescue plans.

Resources are thin. Officials said 85 percent of Britain’s flood defense barriers have already been deployed to the Cumbria area, in the far northwestern corner of England.