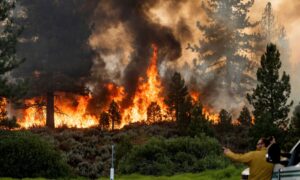 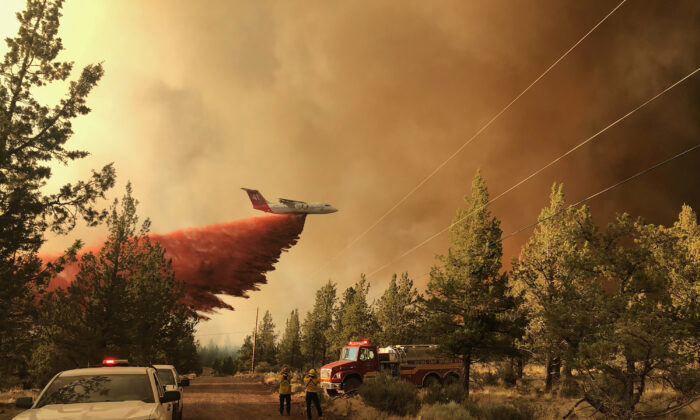 A firefighting tanker makes a retardant drop over the Grandview Fire near Sisters, Ore., on July 11, 2021. (Oregon Department of Forestry via AP)
Local News

In Oregon, the lightning-sparked Bootleg Fire that has destroyed at least 20 homes was raging through lands north of the California border Wednesday.

At least 2,000 homes were threatened by flames.

A spokesman for the Northwest Incident Management Team 10 working to contain the fire, said that since he arrived in the area last week, the blaze had doubled in size each day.

As an intense heatwave abated, excessive-heat warnings expired but fire weather warnings were in place for the interior of Oregon, eastern Washington, part of Idaho, and the northeast corner of California due to winds and very low humidity.

Members of the Oregon National Guard were expected to be deployed to help with road closures and traffic control in fire-affected areas.

The fire in the Fremont-Winema National Forest was burning through a region where the Klamath Tribes—comprising three distinct Indigenous people have lived for millennia.

The Klamath Tribes have been affected by wildfires before, including one that burned 23 square miles in southern Oregon last September.

That fire damaged land where many Klamath tribal members hunt, fish, and gather.

The fire also burned the tribes’ cemetery and at least one tribal member’s house, Oregon Public Broadcasting reported in September.

The tribes are struggling with drought-caused problems. In past decades, they have fought to preserve minimum water levels in Upper Klamath Lake to preserve two species of federally endangered suckerfish that are central to their culture and heritage.

Farmers draw much of their irrigation water from the same lake that’s critical to the fish.

Even before the fire erupted, extreme drought in southern Oregon had reduced water flows to historic lows.

As an intense heatwave abated, excessive-heat warnings expired but fire weather warnings were in place for the interior of Oregon, eastern Washington, part of Idaho, and the northeast corner of California due to winds and very low humidity.