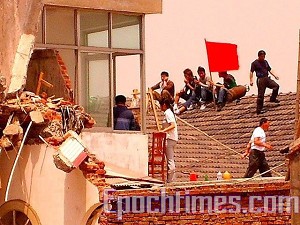 Over twenty of Jia Jinpin's relatives climb onto the roof vowing to protect Jia's home from demolition. (The Epoch Times)
China

Homeowner Vows to Ignite Herself to Stop Bulldozers

As the trend of evicting residents and confiscating property for resale spreads in China, homeowners are forced to ever more extreme means to protect their homes.

At 8:00 a.m. on May 17, vehicles from the Yangzhou City Police, City Management, Ambulance and Hospital Corps joined bulldozers and construction trucks arriving at the business district of Shalian Villiage, Yangzhou City. Their mission was to demolish the home of Jia Jinpin.

The City Management Law Enforcement Squad had decided that Jia home impaired the city's landscape.To defend their home and business, Jia's wife poured gas over her body and climbed onto the roof of the house, threatening to set herself on fire. Jia and other family members stood by her side, vowing to protect the house.

While pouring gas onto her body, Jia's wife had also poured gas onto vehicles from the various city departments, attempting to stop their efforts to demolish her home. At 12:00 noon, the demolition squad left the scene without having bulldozed Jia's house.

Jia had first opened a restaurant in his residence in 1996, when the city authority was trying to promote business. Jia obtained all the necessary permits and constructed the 1645 square meters (about 17,000 square feet) building. Recently, 180 square meters were judged by the Yangzhou municipal authorities' to impair the city's landscape.

“The house were made in 1996 following all the proper legal procedures,” said Jia's wife. “Now they say it is in violation of the city's Regulation of Landscape and Environmental Hygiene. The city authorities first announced on April 27 that they were planning to demolish our home. They have not followed the required legal procedures. Their attempts to bulldoze our home are illegal.”

When the demolition crew started to tear down the house, Jia's wife climbed to the roof, poured gas over her body and threatened to set herself on fire. Jia yelled, using a loudspeaker, “Oppose illegal demolition and the exploitation of citizens!”

At 11:00 a.m. over twenty of Jia's relatives climbed onto the roof, vowing to protect the house. At 12:00 noon, the demolition crew left the scene.

“This morning they came and shut off the electricity,” said Jia's wife. “We have not had any customers for over a month; it's hard to estimate how much money we have lost. In addition to our family, four or five other households have also refused to move. The demolition crew hired thugs to create trouble, telling us not to oppose the Chinese Communist Party.”

Jia is afraid of possible violence toward his family and his customers if he were to reopen his restaurant. He said he dared not take that chance.