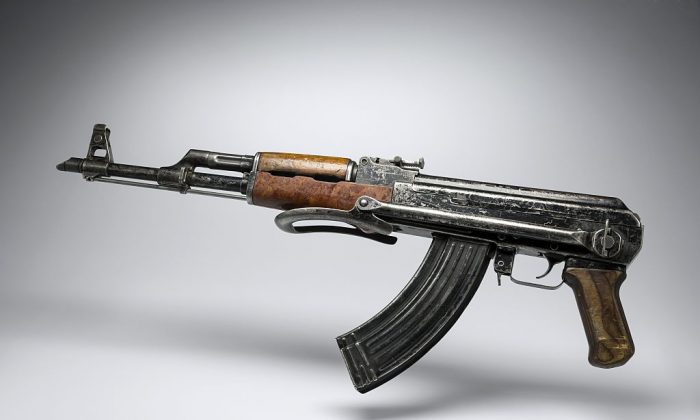 A Florida man shot at three teens after waking up in the early morning and finding them robbing his cars.

The Panama City, Florida homeowner, who’s name has not been revealed by police, awoke on the morning of Aug. 13 to see the three teens going through his two cars, after his wife told him she heard noise in the front yard. The homeowner remembered that he put a firearm in the car that he saw the teens in.

The owner took his AK-47 assault rifle and headed outside to confront the teens. He fired on them, thinking one of them was about to shoot him by the way he suddenly turned toward him. He fired several bullets, hitting one of the teens and hitting their car multiple times.

The damage to the car from the rifle prevented it from getting very far. A tire was flat and one of teens was shot in the leg. The car didn’t get far from the crime scene.

The police were called at 2:45 a.m. A few minutes later, the Washington County Sheriff’s Office found 15-year-old Kevin Taylor, 19-year-old Conrad VonBlankenburg, and 19-year-old Tristen Wilson in a black, 4-door Honda, as NWF Daily News reported. The deputies observed Wilson drop a bag of drugs. Police recovered the stolen 9mm handgun near a wooded area where the Honda had stopped. In addition, another loaded 9mm gun was found in the getaway car.

Wilson did not alert police that he had been shot until all three teens had been detained. He was treated at a local hospital for a bullet wound in the leg. All three teens were charged with grand theft of a firearm, two counts of burglary of a dwelling, structure, or conveyance, and obstructing justice/tampering in felony first-degree proceeding. Police tacked on an additional charge to Wilson for possession of marijuana of less than 20 grams. Police believe all three suspects were either drunk or high on drugs at the time of the incident.

The youngest, 15-year-old Kevin Taylor, was taken to the Department of Juvenile Justice. Conrad VonBlankenburg was taken to Washington County jail. Tristen Wilson was taken to Bay Medical to treat the gunshot wound, as WJHG 7 reported. He was later released from the hospital.

Facebook commenters on the Washington County Sheriff’s Office Facebook page question why the owner left an unsecured gun in his vehicle. They also think the boys could have been killed if it was a different owner.