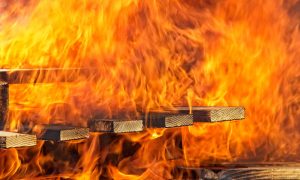 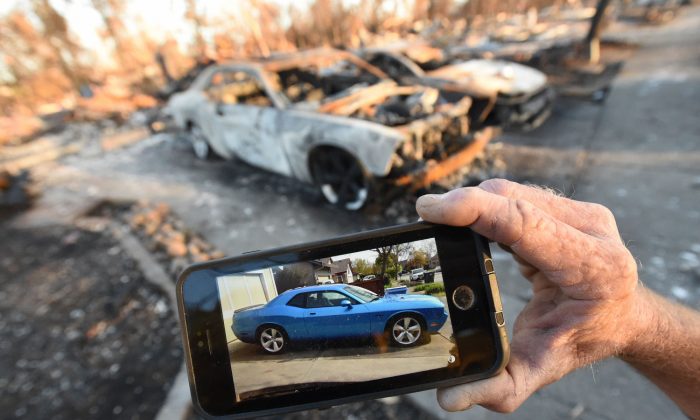 Car collector Gary Dower holds up a photo showing his 2010 Dodge Challenger Limited Edition SRT8 before it burned at his home in Santa Rosa, Calif., on Oct. 20, 2017. (Josh Edelson/AFP/Getty Images)
US News

The state firefighting agency concluded that the blaze started next to a residence. It did not find any violations of state law.

BREAKING: Cal Fire has determined the 2017 Tubbs Fire was ignited by a “private electrical system” — NOT PG&E pic.twitter.com/wuUwjhTe3D

“I eliminated all other causes for the Tubbs Fire, with the exception of an electrical caused fire originating from an unknown event affecting privately owned conductor or equipment,” CalFire Battalion Chief John Martinez wrote in his report.

Some details about the property, including its owner and address, were blacked out of the report. It said the Napa County property about 3 miles north of Calistoga was built in 1946 on about 10.5 acres with a wine cellar, pool, and several outbuildings.

PG&E previously identified the owner of the Napa County compound as Ann Zink. In court filings, the utility said Zink had a private system to carry power to other buildings as well as equipment such as a water pump and water storage tank.

Efforts to reach her Thursday were unsuccessful.

PG&E previously said it plans to file for bankruptcy protection next week, citing $30 billion in potential damages from lawsuits linking its equipment to other deadly blazes for which it has been determined to be at fault.

The company said in a statement that despite Thursday’s finding, it “still faces extensive litigation, significant potential liabilities and a deteriorating financial situation.”

Gov. Gavin Newson said his office believes that more than half of PG&E’s expected damages stemmed from the wine country fire.

Newsom said his goal is to make sure victims are made whole, that the state has “safe, reliable and affordable service,” and that ratepayers “are not paying the price of the neglect” by PG&E established in past wildfires.

“I imagine you’re going to hear a lot of folks questioning aspects of this and they’re going to be concerned and filled with some anxiety,” he said. “I can’t tell you what we can do in those circumstances because that’s a question for lawyers, judges and potentially juries, and prospects of mediators and settlement.”

Legal experts say a determination that PG&E equipment was not to blame for the wildfire will probably not stop it from going ahead with its planned bankruptcy.

The company still faces billions of dollars in potential damages from other wildfires, including the Paradise fire in November that took at least 86 lives and became the deadliest on record in the United States in the past century.

Bankruptcy would also give the company space to formulate a plan to prevent its equipment from causing more catastrophic fires in the future.

Michael Kelly, an attorney for victims of the fire, said the findings wouldn’t have much effect on the lawsuits he has filed.

“We’re going to stick by our guns,” Kelly said, adding that there are still questions about why PG&E didn’t cut power to the area despite a high fire danger. He said there is also evidence that contradicts the findings of state fire investigators.

Trading of PG&E Corp. stock was halted twice after news about the cause of the fire prompted a surge of buy orders. Once trading resumed, the price rocketed up, closing up $5.96, or nearly 75 percent, at $13.35 a share.

Just because a private electric line caused the wine country fire does not let the utility off the hook for the role of its equipment in other devastating fires, said state Sen. Bill Dodd, a Napa Democrat and frequent critic of PG&E.

“This underscores the idea that we all have a role to play in wildfire prevention,” Dodd said in a statement.

PG&E said in a Jan. 2 court filing that it believed a handyman performing unlicensed electrical work started the wine country fire at the Zink property. The utility said it had no responsibility to maintain or inspect the private system.

Zink, 91, told The San Francisco Chronicle in 2017 that her house was unoccupied at the time of the fire and she was at her other home in Riverside County when the blaze began.

One witness, Charlie Brown Jr. of Calistoga, said the electrical wiring leading from Zink’s property had not been used in years.