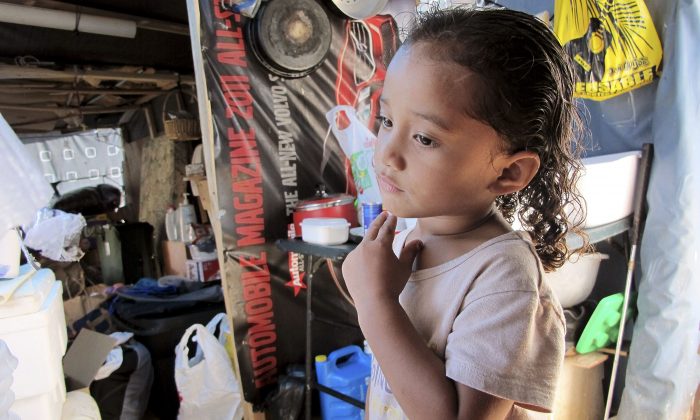 Keioleen Helly, 3, stands inside her family's sidewalk shelter in Honolulu on Oct. 7, 2015. The family was packing up belongings to take to a storage unit two days before the city planned to clear their block of the homeless encampment, hoping to get a ride to the storage unit from a volunteer. (AP Photo/Cathy Bussewitz)
Life & Tradition

Perspectives from the National Coalition for the Homeless
By Shelley B. Blank

“Thank you again for calling this afternoon about Pasadena’s proposed ordinance. The proposed ordinance—which would be developed by the City Attorney’s office, and would return to the council for a first reading later in the month—would establish boundaries of various business districts … and would ‘prohibit camping or lodging’ in those areas.

“It would also ‘prohibit, on all public sidewalks, alleys, streets or other public spaces, begging or soliciting of alms involving threatening, coercive, or menacing behavior.’

“After researching, I do remember seeing the following article.

“What is interesting about this case—and my information comes solely from this article and our conversation—is that the city is proposing the anti-homeless ordinances in conjunction with funding and services to help folks obtain and maintain housing. It is wonderful that the city recognizes that housing and other supports are necessary to end homelessness. However, motel vouchers and rapid rehousing are not always permanent solutions to homelessness. There is nowhere near enough homeless prevention or supportive housing for the number of people who need it. Emergency shelter for people who lose their homes is also woefully underfunded and inadequate for the number of people who could use it nationwide. What shelter is available is often not accessible for a number of reasons and … we continue to see an extreme deficit of affordable rental housing, as well as the decreasing value of wages.

“Many ordinances that seek to ban panhandling, eating or sleeping in certain public spaces discriminate against those who do not have homes. Moreover, other ‘quality of life’ ordinances are selectively enforced only among those who do not have a home or appear to be homeless. Banning panhandling, in most cases, does more to discourage compassion than it does to discourage unwanted behavior. Criminalization of homelessness, and of daily survival activities such as sleeping or eliminating one’s bodily waste, tell our communities that the people who have no home should not be allowed these basic human functions. We are effectively telling our communities that people who are homeless are not human.

“I am attempting to explain how damaging, beyond being potentially illegal, ordinances that criminalize poverty can be.”

Many thanks, and my best regards,

National Coalition for the Homeless

An Interview With David Pirtle

David lived on the streets in Washington for over a year, mainly shoplifting to survive, until he was arrested and eventually placed into mental health treatment. He was also referred to a homeless shelter, where he lived for another eight months. During his experience with homelessness, David was assaulted, beaten with a baseball bat, and even spray-painted. On Nov. 17, 2006, David was granted an apartment through Washington’s inaugural housing-first program. He is now the public education coordinator for NCH.

SBB: David, are there programs that would find “city work,” cleaning up graffiti, for the homeless?

DP: About putting people experiencing homelessness to work providing city services such as street cleaning in exchange for a decent wage. An example of a town which has had some success with this idea is Albuquerque, New Mexico. Instead of ticketing panhandlers, the city solicits them to work day labor jobs for $9 an hour, such as cleaning litter or pulling weeds. The jobs are paid for partly through a donation fund that folks can give to through the United Way. The city also endeavors to connect the workers with services that will help them get off the street.

Our organization applauds such efforts. We believe that criminalizing the act of asking people for help simply hides the underlying need these folks have rather than trying to solve it, and we all know how likely a problem is to be addressed once it’s out of sight.

SBB: What are your recent statistics on the increase of children living in poverty?

DP: Regarding the spike in the number of children living in poverty and homelessness over the past few years, this is a trend we’ve seen in urban and suburban areas across the country, with families being the fastest growing demographic among households experiencing homelessness (as opposed to individual men, women, and unaccompanied youth). It’s difficult to get an accurate number when it comes to how many kids are living without secure housing, since many families aren’t “in the system,” so to speak, living on other people’s couches or in cars or campsites rather than in shelters or transitional housing.

However, the Department of Housing and Urban Development’s own numbers put the percentage of the homeless population under age 18 at nearly a quarter (23 percent). This unfortunate number shouldn’t be surprising, given that the most common reason people experience homelessness every year in the U.S. is the lack of affordable housing. Families are most likely to be homeless for economic reasons, as opposed to the stereotypical causes to which we attribute the problem. The figure mirrors the percentage of children overall in the country living in poverty. That’s why I like to say that homelessness is really just the most visible tip of the “poverty iceberg” in America.

New research suggests that even when one generation overcomes poverty, the next generation suffers the effects of its parental generation. Some of these effects may include negative brain changes, which can lead to life-long problems, possible depression, learning difficulties, an inability to deal with stress, homelessness, and violence. In other words, the inheritance of poverty.

Inadequate education contributes to the cycle of poverty by making it more difficult for low-income children to lift themselves and future generations out of poverty. The National Center for Education Statistics reports that from 2008 to 2010, the total number of children under age 18 living in poverty increased to 16.4 million from 15.5 million. Child poverty rose from 20.7 percent in 2009, to 22 percent in 2010, and this is the highest it has ever been since 1993 (U.S. Census data). One thing the uneducated child knows, you can’t buy your way out of poverty.

What is there to say about poverty?

Poverty is academic: Chronic stress associated with living in poverty has been shown to adversely affect children’s concentration and memory, which may impact their ability to learn. Dropout rate of students living in low-income families is about four and one-half times greater than the rate of children from higher-income families (8.7 percent versus 2.0 percent).

Poverty is about the investment of community building: Poverty-infected neighborhoods can expose low-income children to danger and violence that can cause psychosocial and social dysfunctions, which socially stimulate violence.

Poverty is unnecessary: It is an inheritance tax we pay community by community, it penalizes us with future violent behavior in our children, in our social evolution, our economy, our nation building, and ourselves.

What is there to say about poverty?