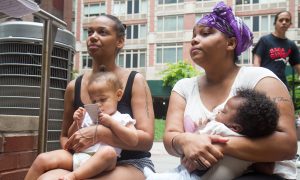 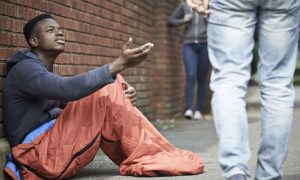 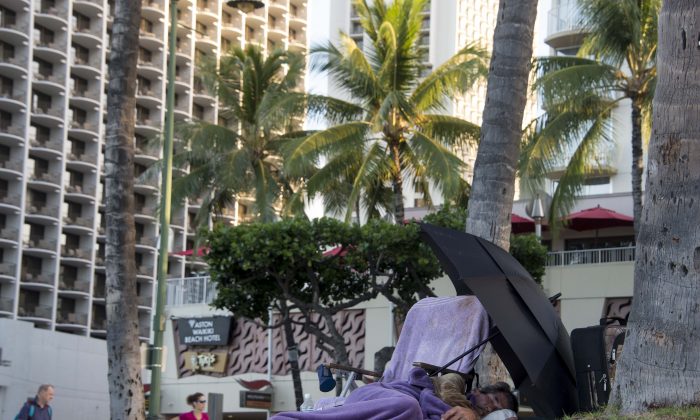 HONOLULU—Two days before the city planned to dismantle her sidewalk home, Kionina Kaneso had no idea where she and her daughter and grandchildren would sleep.

A full-time fast-food worker, Kaneso had bad experiences at shelters before and was hesitant to live in another, ending up instead in one of the nation’s largest homeless encampments for two years. Desperate, she decided to try to get into a shelter.

Kaneso, a daughter and granddaughter made the long walk to one from their camp in a neighborhood between downtown Honolulu’s high-rises, the swaying palm trees of a beachfront park and the glittering tourist mecca of Waikiki.

A shelter worker helped several people from the camp find a spot inside to live.

She wasn’t as lucky: There was no more space for families.

“Where can I go?” Kaneso asked.

Homelessness in Hawaii has grown in recent years, leaving the state with 487 homeless per 100,000 people, the nation’s highest rate per capita, ahead of New York and Nevada, according to federal statistics.

Since 2010, the rise has come even as the national rate has fallen during the economic recovery. The increase, driven by years of rising costs in the island chain, low wages and limited land, thrust the image of people sleeping on beaches alongside the state’s famed one of a relaxing tropical paradise.

Officials have tried to solve the problem, which is centered on Oahu, the most populated island. They’ve offered homeless services, banned sitting and lying on Waikiki’s sidewalks and proposed using shipping containers as temporary housing.

Gov. David Ige’s declaration of a state of emergency on homelessness underscored the depth of the crisis:

A survey by service providers in August of Kaneso’s encampment found that 42 percent of the nearly 300 people were families.

After being told there was no space for her family, Kaneso went through with the application anyway, hoping that a slot would open up. Her daughter, Kifency Kinney, 24, had to apply separately because she was an adult.

This didn’t make sense to Kaneso, who says children stay with their parents long past age 18 back home, the Pacific island state of Chuuk in Micronesia.

“What’s she gonna do? She doesn’t have a job,” Kaneso told the shelter worker.

On the way back to their tent, Kaneso and her daughter pushed shopping carts full of laundry they did while waiting at the shelter. Keioleen Helly, 3, pushed a stroller with the laundry detergent.

Soon, they ran into outreach workers who told them about how buses would take the camp’s residents to shelters.

Kaneso and her daughter then began packing baby oil, a football, chips and clothes into boxes and plastic bins, and called a friend with a truck to help them get their belongings to a storage unit.

She had one more day to figure out what to do with everything that didn’t fit into the truck, and where her family would go.

Kaneso’s encampment, known as Kakaako, wasn’t the only one in Hawaii. Hundreds live in another on western Oahu that’s existed for more than a decade. A strip of waterfront tent sites with the best view is known as “the Hilton.”

Connie “Tita” Hokoana, who has lived in the encampment for seven years, sat on a lava rock as waves splashed over her body.

“This is a multi-million dollar view, and it’s free,” said Hokoana, who had set out a bunch of foraged wild kiawe beans to dry, planning to make tea or peanut butter bars to sell for extra cash.

Few, however, come to Hawaii imagining living in a makeshift tent. Kaneso arrived in 2004 and worked odd jobs as a dishwasher and assembly line worker to pay for her son’s flight to Hawaii so he could get medical treatment for a heart condition.

Kaneso is among the many Micronesians who moved to Hawaii in recent years as part of an agreement their nations have with the U.S. government that allows them to work and live in the country. They come for medical care, education and job opportunities.

The pressure on homeless services has caused some resentment.

While the state doesn’t have a break down by race of the overall homeless population, data on homeless shelter use show that 30 percent were Hawaiian or part-Hawaiian; 27 percent Micronesian, Marshallese or other Pacific Islanders; and 26 percent white.

On Kaneso’s block, most of her neighbors were Chuukese, drawn together by language and a desire to look out for each other. They shared blankets and food and loaned each other money.

Farther down the street, an American Samoan father with diabetes ran a shop out of his tent, using the cash to buy fuel for a generator. On another, a Native Hawaiian ex-convict and airport shuttle driver organized a dishwashing station.

Micronesians say they face language barriers and discrimination. “It’s both blatant and subtle,” said Kandhi Elieisar, consul general for the Federated States of Micronesia, who said he faced prejudice when he looked for an apartment in Hawaii.

Native Hawaiians, some of whom see the U.S. government as an occupier since a group of mainlanders overthrew the queen and took over their land, have long grappled with challenges of their own, from high incarceration rates to health disparities.

To some, the influx of other Pacific Islanders using services adds insult to injury.

“Everything’s pretty much getting stripped away from us,” said Deja-Lynn Rombawa-Quarles, a Native Hawaiian who lived in the Kakaako encampment and worked at an after-school program.

Rombawa-Quarles kept a worn copy of King Kamehameha’s “law of the splintered paddle,” which states that Hawaiians are allowed to lie down by the road. She said Native Hawaiians should be helped first “because we really are suffering.”

“There’s no aloha anymore in Hawaii,” she said.

As homeless numbers rose in the 2000s, Ala Moana Beach Park, not far from Waikiki, became crowded.

The city tried to create a temporary safe zone in 2006 where the homeless could camp legally, but more complaints ensued, so it ended up closing the park every night. Many of the homeless moved into hotel garages and walkways near Waikiki Beach.

Then the city banned sitting and lying down on sidewalks, a move backed by the Hyatt Regency, Hilton Worldwide and other major resorts, which generate much of Waikiki’s $6.8 billion in annual tourism revenue, nearly half of all visitor spending in Hawaii.

The hotels saw fewer homeless people, who then moved into other neighborhoods, prompting more complaints.

“People cannot camp and take over parts of our city and state property that has been built and designed for everyone, not one specific group,” said Mayor Kirk Caldwell, after a group meeting on homelessness in September. “It’s not safe.”

During the sweeps, families lost possessions like the wood they use to build their structures, found furniture and clothes. Kaneso’s family, for example, lost food, propane stoves and her grandchildren’s toys in a raid last year.

“They just treat us like animals,” said Kaneso, who is now part of a lawsuit against the sweeps.

A week after a sweep last year, Kaneso’s boyfriend rebuilt the family home not far from the spot where it had been, on a sidewalk near public bathrooms and laundry facilities and a bus stop where she could catch a ride to work.

An 18-foot, two-room makeshift structure was supported by a chain-link fence on one side and a tree on another, buttressed by two-by-fours, cardboard, poles, tarps and vinyl banners discarded by the nearby Volvo dealership.

She filled buckets that once held restaurant-sized quantities of soy sauce and ice cream with clean water to wash her dishes and bathe her grandchildren. One bucket served as a toilet at night when the public bathrooms at a beach park were closed.

Kaneso did her best to keep their home clean, removing her shoes before going inside and sweeping morning and night.

From there, she headed to work each morning, catching a bus that climbs into the Koolau mountains, passing lush forests and waterfalls, to McDonald’s where she works. One evening, with extra burgers in hand, she waited for nearly 40 minutes for her bus.

As light rain fell, buses carrying tourists whizzed past, on their way to Waikiki.

Service providers say 40 percent of Hawaii’s homeless people are working at least part-time, 30 percent need some housing assistance and 30 percent have mental health or substance abuse problems that prevent them from maintaining a home.

For Kaneso, the month had been tough financially: She helped pay for a cousin’s hospital stay and contributed money for the funeral of her 16-year-old nephew. Her family in Chuuk was asking her to send money for fuel and food.

And she still needed to pay for propane for herself and her neighbors, and was running out of rice and water.

Kaneso’s job nets her $8.75 an hour, but it doesn’t come close to what she needs to pay rent in a market where a two-bedroom apartment goes for $1,800 a month.

Honolulu officials have set aside at least $16.8 million for services and to secure apartments for homeless people in 2015, including plans to develop units out of shipping containers to temporarily house transients on Sand Island and the Waianae Coast.

City officials also are backing at least $32 million in bonds to finance other housing for homeless people.

Meanwhile, the Public Housing Authority has been cracking down on people living in its units with friends or family who were not on the lease, said Connie Mitchell, director of the Institute for Human Services, the state’s largest homeless services provider.

With no place else to go, many wound up on the street.

Kaneso, who lived with a sister in public housing but left because she didn’t want to get her in trouble, has been on a waiting list for Section 8 assistance since 2006, and found out she made it to the top 250 last year.

Kaneso had left a shelter for the streets after workers during one stay threw away her belongings, including her birth certificate and passport, while she was out visiting her son.

As evening fell the day before the sweep, Kaneso, despite her worries, laughed as a cousin stopped by with rice to share.

“I love my house,” Kaneso said wistfully, before settling down to the sounds of neighbors’ hip hop music and occasional shouts.

On the morning of the sweep, crews began clearing sidewalks and a city bus waited to take willing people to shelters.

Keioleen played on a pink Disney Magic scooter while Chuukese families gathered at picnic tables in a nearby park under the trees, bringing shopping carts and strollers laden with suitcases and plastic bags. Suddenly, sprinklers turned on, sending them scrambling with their belongings. Officials said they couldn’t stay there.

Kaneso relied on strangers to move her belongings to storage, and then, after hours of uncertainty, she and her family got into a shelter. But she didn’t want to stay there for long; shelter rules prevented her from cooking for her family, and it was challenging for extended family to visit to provide childcare for her grandchildren while she was at work.

But the alternatives were scant. She’s one of thousands of people on the public housing waiting list.

“What is the use for us, to keep telling us to wait this long?” Kaneso said.