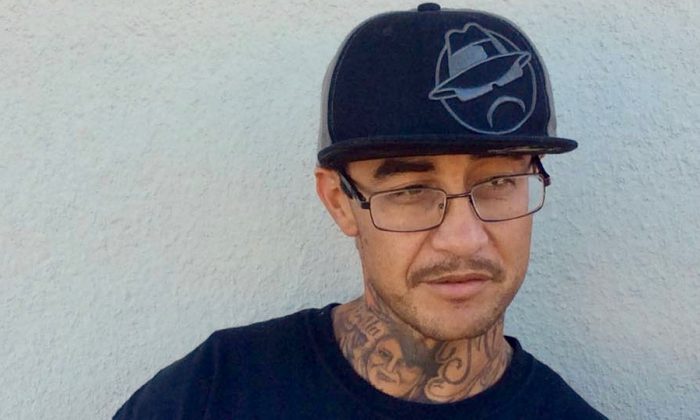 Anival Angulo, the 36-year-old homeless man who rescued a baby and child from a Las Vegas fire. (Las Vegas Fire & Rescue)
US News

A homeless man who happened to see an apartment on fire sprung into action and rescued two small children trapped inside during the late morning hours of Dec. 1, The Washington Post reported.

Anival Angulo jumped over a security gate and pulled up a steel security door in order to access the apartment. The 3-year-old girl and the 10-month-old baby were trapped inside, surrounded by billowing smoke. The dense smoke filled the apartment and left only one foot of visibility coming from the bottom of the floor, according to Las Vegas Fire & Rescue Public Information Officer Tim Szymanski, via a phone interview.

Angulo saw the girl, who was too afraid to open the steel door to get out. Angulo pulled up on the door, forcing it upward and bending it by the corner until it unlocked and swung open, according to Szymanski. Then Angulo spotted the leg of a baby through the wall of smoke, and went into the apartment to pull the baby to safety, Washington Post reported.

The children were staying with their grandfather at the time, who was unable to reach them once the fire started. The grandfather was in the back bedroom at the time, and exited to safety through a window. The children were in the front part of the house, and the smoke and fire separated them, according to Szymanski. Firefighters arrived minutes later and were able to bring the blaze under control, KSNV reported.

“It’s obvious if this person hadn’t been there, these children could’ve been burned or may have been killed in the fire,” Szymanski told KSNV, referring to Angulo.

The fire started due to a pan with grease that was on the stove, according to the Las Vegas Fire & Rescue Facebook page. Both the kitchen and living room were gutted by the fire. The fire department estimates the fire caused $50,000 worth of damage.

The children were taken to the hospital and treated for minor smoke inhalation, according to the Facebook Page. The grandfather did not need to be treated.

Szymanski said via the phone call that Angulo was homeless due to “extenuating circumstances.” He was working for someone who agreed to let him live in his home temporarily, and he was passing by and saw the fire. Last Szymanski heard, Angulo was out going on job interviews.