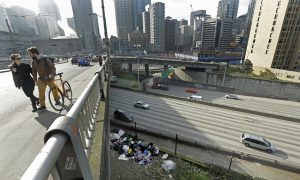 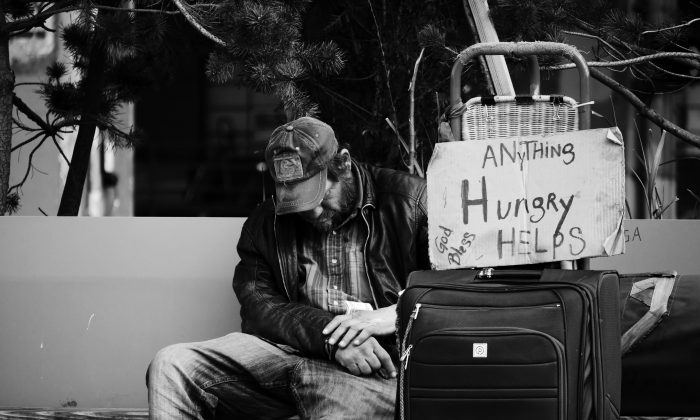 A homeless man in Seattle, Wash. To really help homeless people, we need to understand the reasons why people become homeless in the first place. (Steve Knutson/Unsplash)
Viewpoints

Homeless in Seattle: When Caring Is Not Enough

In his recent monologue attacking Sen. Mitt Romney as a complacent supporter of the status quo, Fox News host Tucker Carlson showed the severity and similarity of the social problems of urban blacks and rural whites. He explained the persistence of both with the refrain that “the ruling class doesn’t care.” But caring is not always enough.

Sometimes policymakers and activists systematically go for the wrong answers. They spend money and develop programs without regard to outcomes, substituting good intentions for positive results.

Take the example of homelessness in the rich and liberal city of Seattle. Christopher Rufo, in an extensive analysis in City Journal, cited an estimate that the Seattle metro area spends more than $1 billion fighting homelessness every year.

“That’s nearly $100,000 for every homeless man, woman, and child in King County, yet the crisis seems only to have deepened, with more addiction, more crime, and more tent encampments in residential neighborhoods,” Rufo wrote.

There is no lack of caring or effort, as measured by spending. The problem is that the efforts are not working and the problem is getting worse.

To understand what is happening, Rufo described four ideological tendencies or power centers that frame Seattle’s homelessness debate. He labeled them the socialists, the compassion brigades, the homeless–industrial complex, and the addiction evangelists.

The socialists blame capitalism and the way the city’s biggest wealth creators, Amazon, Starbucks, Microsoft, and Boeing, drive up housing prices, increasing working class poverty and homelessness. They push an agenda of resentment and seek to punish the “billionaire class” with punitive taxes on corporations and the rich, along with other measures like rent control, public housing, and minimum wage hikes.

The second category are the “compassion brigades.” They seek to protect homeless people from harsh measures and aim to make homelessness in Seattle more attractive and less difficult. They seek to legalize homelessness, allowing street camping on public sidewalks, permitting RV camping on city streets, and preventing the city’s Navigation Teams (made up of police and outreach workers) from cleaning tent cities.

A third tendency—the “homeless–industrial complex”—consists of the agencies and executives who are the big winners in the disbursement of the $1 billion dollars spent annually on homelessness in Seattle. They depend on contracts and grants from city and county governments that funnel hundreds of millions of dollars to organizations that provide subsidized housing.

The last of the four tendencies is the “addiction evangelists.” They aim, in the name of harm reduction, not only to legalize drug use but to elevate addicts and street people into a protected class. “They don’t want society simply to accept their choices; they want society to pay for them,” Rufo wrote. The goal is “not prevention, recovery, or rehabilitaristion—but normalization of heroin, meth, and crack addiction.”

The ideologies, methods, and goals of these four approaches differ, but as policies, they share important similarities.

None of them has an empirically based understanding of the homelessness phenomenon in Seattle or why the problem is growing ever more serious. There is an imperviousness to evidence that one might be tempted to call clinically delusional, were it not such a typical feature of decision-making in business and government more widely.

In Seattle, we see an extraordinary and persistent belief in myths that became accepted as common sense despite a lack of empirical support.

For example, the compassion brigades based their approach on three false but widely held beliefs that sustained their efforts. They believed that most of the city’s homeless were working at full-time jobs, which they were not, while downplaying the 80 percent who suffered from drug or alcohol addiction and the 30 percent who suffered from severe mental illness. They believed that the homeless were already local residents when they became homeless and ignored the large and growing numbers, perhaps half of all the homeless, who were drawn to the city from outside by its permissive culture.

As Scott Lindsay, the city’s former top crime adviser, told the mayor, “The increase in street disorder is largely a function of the fact that heroin, crack, and meth possession has been largely legalized in the city over the past several years. The unintended consequence of that social policy effort has been to make Seattle a much more attractive place to buy and sell hard-core drugs.”

The tendency to ignore such foreseeable but unintended consequences, to avoid seriously considering what could go wrong, or looking at worst-case scenarios, has been unhelpful to the homeless and the city, since all the initiatives aimed as resolving or alleviating the problem have had little effect or even the opposite of the intended one.

The policies and programs intended to be compassionate and helpful served instead as a magnet, drawing in homeless people from far and wide, increasing the incidence of the resulting problems—criminality, public disturbances, and a decline in quality of life of settled residents.

In developing policy to address a problem like homelessness, the first and key step is to figure out what the problem actually is. The kinds of policies or programs that might mitigate it follow from that.

All these ideologies and approaches get it wrong. The socialists think the problem is that rents are too high. But the vast majority of those with low incomes find other ways to cope. The compassion brigades see the problem as a lack of services, but most of the homeless refuse services when they are offered.

As Rufo puts it, “The city’s compassion campaign has devolved into permissiveness, enablement, crime, and disorder.”

The homeless–industrial complex, responding to the perverse incentives of the grant-funding system, has shifted its mission from helping the homeless to securing government contracts on which the service providers depend to pay their staff.

“When their policy ideas fail to deliver results, they repackage them, write a proposal using the latest buzzwords, and return for more funding. Homelessness might rise or fall, but the leaders of the homeless–industrial complex always get paid,” Rufo writes.

While blaming all kinds of villains and scapegoats as the root causes of homelessness, all four ideological tendencies ignore the empirical evidence that social scientists have for decades identified as key in determining which of the poor and low paid or out-of-work end up homeless.

As family and neighborhood bonds weaken, the most vulnerable lose their ties to family, community, friends, and church.

As Alice Baum and Donald Burnes put it in their authoritative 1993 study, “Poor people who have family ties, teenaged mothers who have support systems, mentally ill individuals who are able to maintain social and family relationships, alcoholics who are still connected to their friends and jobs, even drug addicts who manage to remain part of their community do not become homeless.”

Those who become disaffiliated from the support networks they once relied on, do.

The task is not one of spending even more than $100,000 per person, on new apartments and services, or new approaches to enabling and funding drug use and public disorder. It is one of rebuilding and strengthening families, neighborhoods, and communities, while building emergency shelters and enforcing the law.

It is an undertaking, as well, that requires us to be aware of our built-in tendency not to see or seek information that is right in front of us when it does not fit our preconceived ideas. Instead of looking for evidence to confirm what we already thought and avoid or ignore disconfirming evidence, we need to do the opposite.

Paul Adams is a professor emeritus of social work at the University of Hawai‘i, and was a professor and associate dean of academic affairs at Case Western Reserve University. He is the co-author of “Social Justice Isn’t What You Think It Is,” and has written extensively on social welfare policy and professional and virtue ethics.