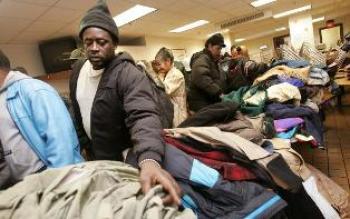 New York Mayor hands out coats to the poor. (Mario Tama/Getty Images)
US

Gidon Belmaker
Gidon Belmaker is a former reporter and social media editor with The Epoch Times.
View profile
Follow
biggersmaller
Print
NEW YORK—The harsh cold of New York City winters can be especially hard on those who don't have a roof above their heads or a bed to sleep in. City agencies and civic organization try to help.

There are many moments when you feel hopeless, said Duwan Briant, 44, who used to ride the A train as a place to sleep. When riding on the train, the isolation and loneliness can be a heavy burden, he added.

Briant was homeless for 10 months, but was able to find a house about five years ago. Today, he is working with Picture The Homeless (PTH), a grassroots homeless rights organization. As part of his work at PTH, he goes to soup kitchens to offer homeless people information about the options they have.

“You take it day by day try to get through,” Briant said, describing the routine at that time in his life. At night, he would ride the subway. In the mornings, he would go to a church to eat and shower. “That cycle seemed like forever. It seemed like it was not going to end,” he said.

Even while homeless, Briant kept working as a courier. Eventually, using his free time to connect to different people, he came across a man who offered him a place to live. By that time, he had saved enough money to pay the rent.

The train, he explained, is sometimes better than the city shelters. “A lot of people don't like to go to the shelter because it’s rough.” he said, adding that when a man is in that state, the stressful environment in the shelter can be a burden. Riding the train, he was able to get some peace of mind to help cope with his situation.

The Department of Homeless Services offers several forms of care, including drop-in shelters for immediate situations, secure shelters for longer stays, as well as prevention programs for those who may be on the brink of losing their homes. In the Drop-in shelters, homeless people can get a meal, take a shower, and receive medical care.

According to data from the DHS dated Jan. 4, there are currently 36,739 homeless people in shelters and other facilities around the city. Among them are 14,713 children.

Many of the city-sponsored facilities are operated by faith-based or civic organizations. The Bowery Mission, for example, is one of the providers for the city. It operates a shelter, recovery programs, and an outreach program to convince homeless people to seek help. Every Saturday, over the next four weeks, volunteers from the mission will comb the city to find those in need and offer a helping hand.

The current homeless policy has been under some scrutiny by homeless rights organizations. In a policy paper published by the Coalition for the Homeless last July, the organization claims that the policy of short-term rental subsidies has aggravated the situation in the city. According to the organization, since Mayor Bloomberg set forth the new policy, the number of homeless families has reached record numbers.