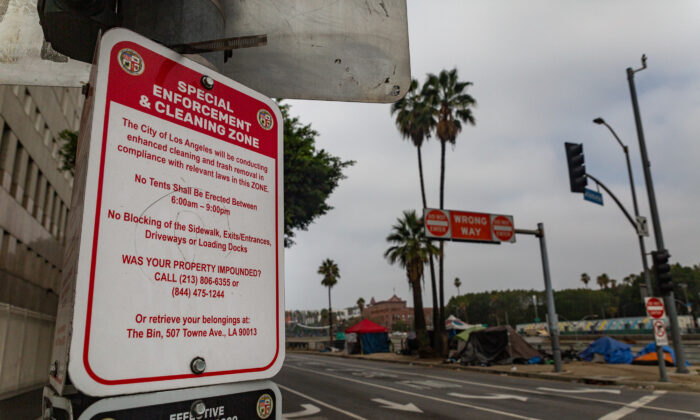 Homeless Encampment Near SoFi Stadium Cleared Ahead of Super Bowl

The California Department of Transportation (CalTrans)—the department that owns the land and conducted the cleanup—cleared the encampment because it presented a “fire safety issue,” according to a CalTrans spokesperson.

According to 2021 Los Angeles Fire Department data, 54 percent of fires the department responds to are due to homeless people, and the city has up to 25 fires a day caused by encampments.

“The department collected personal belongings left behind and took them to a nearby maintenance yard for later retrieval,” a CalTrans spokesperson told The Epoch Times in a statement.

CalTrans posted a notice at the site three days before the cleanup on Jan. 20 to allow people living in the underpass to gather their belongings and find services. The department coordinated with Los Angeles Homeless Services Authority (LAHSA) who were also present during the cleanup to offer people housing services.

“[On Tuesday], we talked to 8 people at the encampment,” a LAHSA spokesperson told The Epoch Times in an email. “We offered general services, gauged their interest in shelter, and referred some of them for emergency housing vouchers (EHVs). Other organizations’ outreach teams also connected with people there, so these numbers only refer to the work LAHSA outreach did.”

But the move prompted residents to wonder whether the cleanup was purely for optics ahead of the Super Bowl in three weeks, since the encampment is the gateway route from the Los Angeles International Airport to the SoFi Stadium where the football game will be held.

“Because of the football, they wanna start coming in and putting a big old rush on it, they don’t really care about the homeless needs … it’s more about the look,” Inglewood resident Nicole Randolph told NBC4.

Inglewood Mayor James T. Butts disagreed and said random cleanups have been conducted by CalTrans in the last few years, with the last one targeting this encampment nearly a year ago.

“They belong to CalTrans, they don’t belong to the city,” Butts said of the underpass property.

Residents skeptical of officials’ motives is reminiscent of when the last Super Bowl was held in Northern California in 2016 at the Levi Stadium in Santa Clara. At the time, San Francisco residents protested as officials moved dozens of homeless encampments from a highway overpass before the football game, citing it as a public safety hazard.

As city officials grapple with the growing homeless population estimated to reach 90,000 by 2023, 94 percent of Los Angeles voters say it is a “very serious” issue ahead of the November election, a survey found. The City of Los Angeles currently has 41,000 homeless people living on its streets and 66,000 in the county according to the 2020 homeless count. The next homeless count is scheduled for Feb. 22–24.