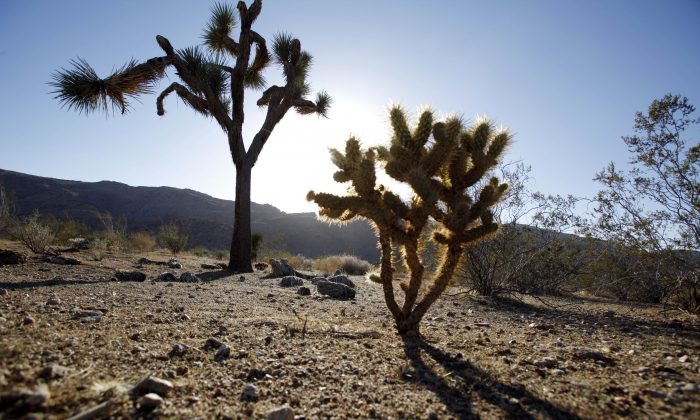 In this Nov. 8, 2010 file photo, a seedling Joshua tree, right, grows in the shadow of a mature tree in the Mojave Desert near the town of Apple Valley, Calif. (AP Photo/Reed Saxon, File)
US

TWENTYNINE PALMS, Calif.  — A homeless couple was arrested after the woman’s three young children were punished by being sent into a California desert without shoes or water, authorities said Thursday.

The children — a 7-year-old girl and 6- and 5-year-old boys — did not require medical treatment Wednesday after a resident spotted them near a road and called 911, San Bernardino County sheriff’s spokeswoman Cynthia Bachman said.

Temperatures were in the low 90s at the time.

Deputies found the mother and her boyfriend a short distance away on the road near Twentynine Palms in the Mojave Desert about 130 miles east of Los Angeles.

The couple was within sight of the children, “but it was apparent they weren’t keeping a visual on them,” Bachman said.

She estimated the children had been wandering about 45 minutes. Officials haven’t determined why the children were being punished. Bachman said the family had been living in a car.

The children were taken by the county’s Child Support Services department.

Mary Bell, 34, and Gary Cassle, 29, were arrested on suspicion of child abuse, and bail was set at $100,000, Bachman said. Arraignment was scheduled Friday. Bachman didn’t know if they had attorneys.

In Japan a 7-year-old boy survived nearly a week alone in a forest after authorities said he was abandoned by his parents as punishment for throwing rocks at cars.

Yamato Tanooka was released from a hospital June 7 and told reporters he was feeling fine. Police said they did not intend to press child neglect charges against his parents.

One-Month-Old Baby Left Abandoned Under a Bridge in China