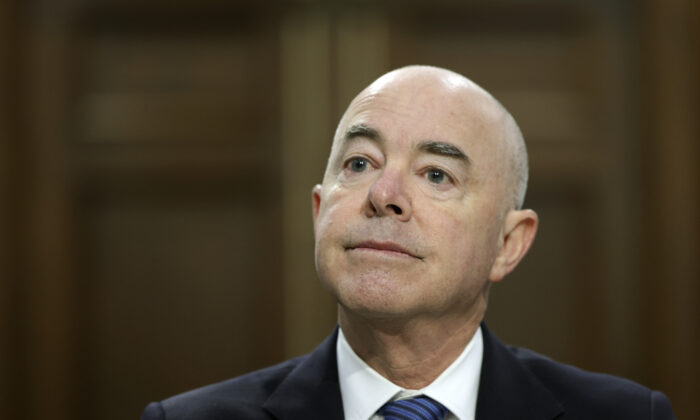 Department of Homeland Security Secretary Alejandro Mayorkas defended his agency’s move to create a so-called Disinformation Governance Board after it faced widespread criticism that it was tantamount to an Orwellian “Ministry of Truth.”

In an interview with CNN on Sunday, Mayorkas said the new DHS panel would not be used to monitor American citizens and praised its new leader, Nina Jankowicz, after it was revealed that she posted crude and bizarre videos online and repeated false claims in late 2020 that reports about Hunter Biden’s laptop were part of a Russian disinformation plot.

“The board does not have any operational authority or capability,” Mayorkas told CNN on Sunday. “What it will do is gather together best practices of addressing the threat of disinformation from foreign state adversaries, from the cartels, and disseminate those practices to the operators that have been executing and addressing this threat for years.”

When asked by CNN’s Dana Bash about whether the board will monitor U.S. citizens, Mayorkas replied, “No.” At the same time, he praised Jankowicz as “neutral,” a “renowned expert,” and “eminently qualified” to lead the panel. Jankowicz previously served at the Woodrow Wilson Center think tank and had written opinion articles for a variety of mainstream publications.

Republicans and critics of Big Tech said the panel will attempt to suppress conservative viewpoints and views that are outside of the mainstream, comparing it to the infamous Ministry of Truth in George Orwell’s novel, “Nineteen Eighty-Four.” The timing of Mayorkas’s announcement was also flagged as suspicious by critics, who said it is being unveiled just days after tech billionaire Elon Musk and Twitter announced he would take over the company.

Mayorkas testified last week in Congress that the board was recently created to combat so-called online disinformation. The board, he added, will focus on the spreading of disinformation in minority communities. He did not provide more details.

“The goal is to bring the resources of (DHS) together to address this threat,” Mayorkas told lawmakers.

In response, Musk wrote on Twitter that the board’s creation is “discomforting,” without elaborating, in response to a post from conservative commentator Steven Crowder.

Last week, the White House also defended DHS’s creation of the disinformation board, claiming that it was a continuation of an effort organized under the Trump administration.