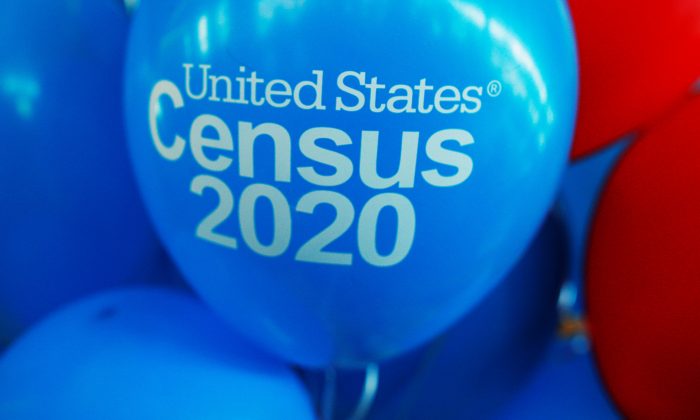 Balloons at an event to mark the one-year-out launch of the 2020 Census efforts in Boston, Mass., on April 1, 2019. (Brian Snyder/Reuters)
US News

The Department of Homeland Security (DHS) said it will share citizenship data with the Census Bureau, months after an executive order issued by President Donald Trump ordered agencies to do so.

Trump ordered federal agencies to share data with the Census Bureau after the Supreme Court ruled against the administration’s attempts to add a citizenship question back onto the census for 2020.

The nation’s highest court stated in a 5–4 ruling that the administration didn’t provide adequate reasoning for putting the question back on the census. Attorney General William Barr said the administration would have ultimately prevailed in the court battle, but he and Trump chose to go another route.

Trump announced the order on July 11, 2019, requiring all federal agencies to submit existing information about U.S. citizens and noncitizens to the Department of Commerce.

“Knowing this information is vital to formulating sound public policy,” Trump said at the time, citing health care, voting districts, and other issues.

Barr added that the order “will finally give us an accurate understanding of how many citizens and non-citizens live in our country.”

In a document (pdf) issued in December 2019, the DHS stated it would share information with the Department of Commerce and the Census Bureau to help determine “the number of citizens, lawfully present non-citizens, and unauthorized immigrants in the United States during the decennial census (2020 Census).”

The data will include “personally identifiable information,” such as Social Security number, date of birth, age, and country of birth, the department stated.

“The Census Bureau plans to use several administrative data sources of citizenship and immigration status in a statistical model that will produce a probability of being a U.S. citizen, a lawfully present non-citizen, or an unauthorized immigrant on April 1, 2020, for each person in the 2020 Census.”

“The objective of the project as described in the [executive order] is to determine the number of citizens, lawfully present non-citizens, and unauthorized immigrants in the country.”

The records being shared would date back to 1973.

People who shared data with the DHS who weren’t aware that information would be shared with the Census Bureau don’t have an opportunity to consent or opt out of having the data shared, the department stated in the document.

If the census gets someone’s citizenship status wrong, there won’t be an “adverse impact” to that person because the compiling “is for statistical purposes and Census statistical products only,” the department stated.