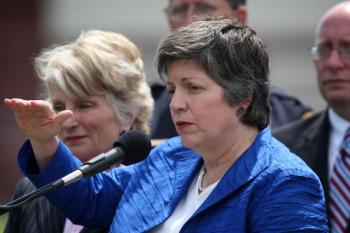 Department of Homeland Security (DHS) Secretary Janet Napolitano, along with Rep. Jane Harman, D-Venice, California, talks to reporters as she to tours security features at the Port of Los Angeles on April 13, 2009 in San Pedro, California. (David McNew/Getty Images)
US

By Joshua Philipp
Print
A report published by the Department of Homeland Security (DHS) on April 7 has received criticism from U.S. veterans.

The report, "Rightwing Extremism: Current Economic and Political Climate Fueling Resurgence in Radicalization and Recruitment" warns of the potential threat of right-wing extremist groups. The DHS issued a similar report on Jan. 26 warning of left-wing extremist groups that may use cyberwarfare as a form of attack.

The recent report wasn't taken well as it says right-wing extremists may try to recruit returning veterans from the wars in Iraq and Afghanistan “in order to boost their violent capabilities.”

The report was sent to law enforcement agencies across the U.S.

American Legion National Commander David Rehnbein sent a letter to DHS Secretary Janet Napolitano in concern of the report. The letter was written on behalf of the American Legion's 2.6 million members.

“The best that I can say about your recent report is that it is incomplete,” Rehnbein said, citing a section of the report that claims restrictions on firearms and returning military veterans who are having trouble reintegrating into their communities could “lead to the potential emergence of terrorist groups or lone wolf extremists capable of carrying out violent attacks."

Rehnbein states the report fails to use “statistical evidence” to label such a threat.

The DHS report uses Timothy McVeigh as an example to such a threat, yet Rehnbein expressed that McVeigh was only one of the 42 million veterans who served in the U.S. military.

“To continue to use McVeigh as an example of the stereotypical 'disgruntled military veteran' is as unfair as using Osama bin Laden as the sole example of Islam,” Rehnbein said.

“I think it is important for all of us to remember that Americans are not the enemy. The terrorists are,” he said.

The DHS report also warns of Americans purchasing large amounts of firearms amid fears of tighter gun control, racist groups, and others named as potential threats.

The report also states that none of these groups have indicated plans of carrying out violent acts, yet the current social environment “could create a fertile recruiting environment for right-wing extremists and even result in confrontations between such groups and government authorities similar to those in the past.”

Napolitano issued a press release on April 15 explaining the purpose of the report and mentioning that a meeting has been scheduled with Rehnbein to to discuss the issue further. “I will tell him face-to-face that we honor veterans at DHS and employ thousands across the department, up to and including the Deputy Secretary,” Napolitano said.

The press release doesn't apologize for the report, but rather explains DHS's reason behind issuing it.

The primary mission of this department is to prevent terrorist attacks on our nation,” Naploitano said.

“Let me be very clear: we monitor the risks of violent extremism taking root here in the United States. We don’t have the luxury of focusing our efforts on one group; we must protect the country from terrorism whether foreign or homegrown, and regardless of the ideology that motivates its violence,” she said.

“We are on the lookout for criminal and terrorist activity but we do not – nor will we ever – monitor ideology or political beliefs.”