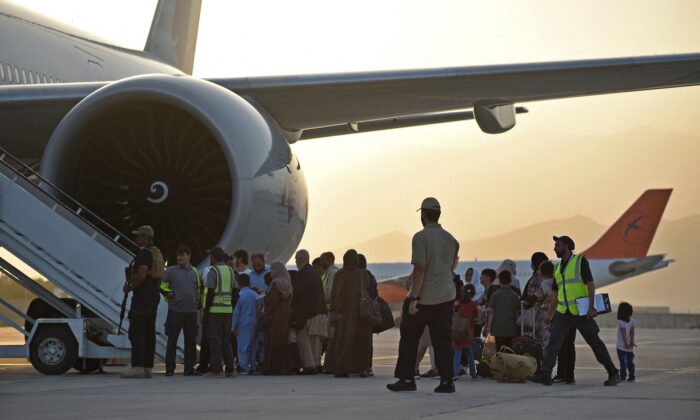 Homeland Security Blocks Flight Carrying US Citizens From Afghanistan From Landing in US: Organizer

The Department of Homeland Security (DHS) won’t allow a charter flight carrying U.S. citizens and other evacuees from Afghanistan to land in the United States, one of the flight’s organizers says.

Bryan Stern, who founded Project Dynamo, said that 117 people, including 59 children, are stuck at an airport in Abu Dhabi, United Arab Emirates, waiting to fly back to the United States. Project Dynamo is an organization that works to evacuate people from Afghanistan.

Stern told Reuters on Sept. 28, that DHS and Customs and Border Protection (CBP) were blocking the flight, saying the agencies “will not allow a charter on an international flight into a U.S. port of entry.”

A State Department spokesperson said it’s working to verify the accuracy and identities of passengers on the charter plane commissioned by Stern.

“Our embassy staff in the UAE has been working around the clock to verify the accuracy of the passenger manifest and is coordinating with DHS/Customs and Border Protection on the ground to ensure the passengers are screened and vetted before they are permitted to fly to the United States,” the spokesperson said. The Epoch Times has contacted the agency and DHS for comment.

The spokesperson said that “we expect the passengers to continue onward travel tomorrow morning.”

“All U.S.-bound flights must follow the established safety, security, and health protocols before they are cleared for departure,” a DHS spokesperson told Reuters. “This process requires flight manifests to be verified before departure to the U.S. to ensure all passengers are screened appropriately.”

Project Dynamo posted to Facebook pictures of the children sleeping in the UAE airport.

“Right now we have 59 children sleeping on airport chairs and cold airport floors—not the warm bed with a hot meal that we’d arranged for all of them stateside—because the U.S. Government denied our flight clearance into ALL U.S. ports of entry. All of them. For a plane load of Americans,” it said in the post.

Mass evacuations of Americans, special visa holders, and some Afghan refugees were carried out last month as the Taliban extremist group took over Afghanistan. It came after the U.S. military withdrew its forces after two decades.