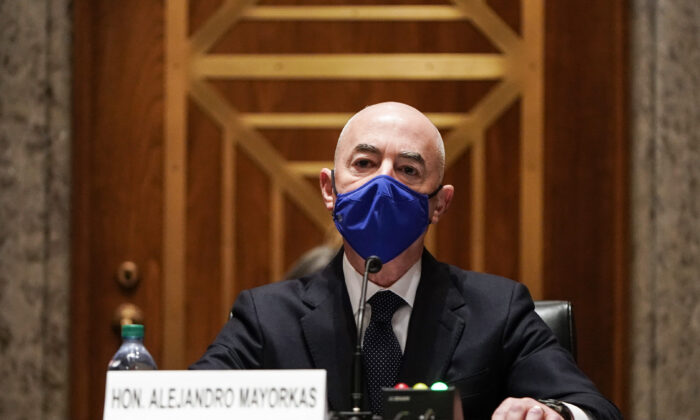 WASHINGTON—The nominee to head the Department of Homeland Security under President Joe Biden intends to swiftly halt all border wall construction and won’t commit to keeping the current fencing in place.

“President-elect Biden has committed to stop construction of the border wall—it would be my responsibility to act on that,” Alejandro Mayorkas told the Senate Committee on Homeland Security and Governmental Affairs during his confirmation hearing on Jan. 19.

“And I have not looked at the question of what we’d do with respect to the wall that already has been built. And I look forward to studying that question, understand the costs and benefits of doing so.”

Congress recently appropriated $1.4 billion for border wall construction in the 2021 National Defense Authorization package, which Mayorkas said he would examine to “see what the opportunities are to discontinue any such obligation, if in fact, the law permits, and act accordingly.”

During the Trump administration, more than 450 miles of border fencing have been constructed along the U.S.–Mexico border, much of which has replaced old or ineffective barriers.

Mayorkas served as head of U.S. Citizenship and Immigration Services during President Barack Obama’s first term and then deputy secretary of the Department of Homeland Security during his second term.

He said Border Patrol agents have told him that “a diverse approach to border security” is necessary, which means border wall might help in some areas, but in others, more agents or technology would be more effective.

“I look forward to studying the challenges at the border and developing a sophisticated approach to meet those challenges,” Mayorkas said.

The council’s president, Brandon Judd, has said border agents are grateful for the new fencing, which comes with access roads, lighting, and technology, and that a wall is the only way to end the humanitarian crisis on the border.

Mayorkas’s nomination hearing took place as a caravan of 9,000 Hondurans continued to march toward the United States after breaking through the Guatemalan border.

When asked what his message to the caravan was, Mayorkas said, “We are a nation of immigrants and we are also a nation of laws. … When people present themselves at our border, we apply the laws of our nation to determine whether they qualify for relief under our humanitarian laws, or whether they don’t.”

Mayorkas would be largely responsible for carrying out Biden’s immigration agenda, which calls for a large amnesty of at least 11 million illegal immigrants living in the United States, as well as broadening the asylum system and dismantling many of the processes Trump put in place to curb illegal border crossings.

Under Biden, Mayorkas would end the Migrant Protection Protocol (MPP) program, which was launched in January 2019 to help stem the flow of meritless asylum claims that were clogging up the system by the hundreds of thousands. The MPP program forces asylum seekers to wait in Mexico while their asylum case is adjudicated. Prior to its implementation, thousands of illegal immigrants were released into the United States to await their cases, most failing to appear in court.

On his first day in office, Biden is expected to present an immigration reform package that Mayorkas said “once and for all fixes, I think, what we all can agree is a broken immigration system.”

Biden’s platform on immigration during the election included increasing the refugee cap to 125,000 per year (from 18,000) and vastly expanding government resources for all immigrants; rescinding bans on travel from terror-prone countries; halting enforcement of laws around legal employment; and promoting union organization.

An effort to decrease detention and Immigration and Customs Enforcement interior enforcement efforts is also expected, although Mayorkas said he opposes defunding the agency completely.

If the Senate committee votes to advance Mayorkas’s nomination, it will head to a full vote on the Senate floor.