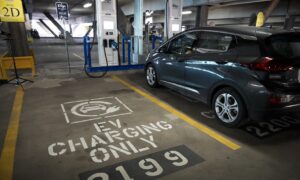 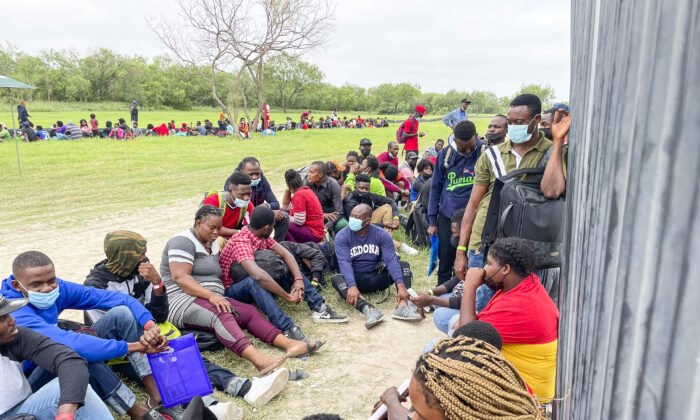 A group of more than 350 illegal immigrants wait for Border Patrol after crossing the Rio Grande from Mexico into Del Rio, Texas, on July 25, 2021. (Charlotte Cuthbertson/The Epoch Times)
Congress

Illegal immigrants are crossing into the United States from Mexico in record-shattering numbers, but the Department of Homeland Security (DHS) is ignoring a congressional request for information regarding where the government is relocating them, lawmakers say.

“On April 15, 2021, 34 Members of the House of Representatives sent a letter requesting important information regarding the destinations within the interior of our nation of the heavy illegal migration over our nation’s border,” Sen. Mike Braun (R-Ind.) and Rep. Louie Gohmert (R-Texas) told DHS Secretary Alejandro Mayorkas in an Aug. 5 letter.

“As of the date of this letter, the response from [HHS] deferred to [DHS], and regrettably, DHS has not responded to the Congress’ letter,” Braun and Gohmert told Mayorkas and Becerra.

The lawmakers said the repeated requests for relocation information were made because “border crossings remain unsustainably high. In July, it was reported that attempted crossings at the U.S.–Mexico border remain at a historically high level not experienced in at least 21 years.

“In June, more than 188,829 individuals were taken into custody by Customs and Border Patrol (CBP), including 15,018 unaccompanied children. This former figure represents an alarming 141 percent increase from January 2021. Like so many in our nation, we remain deeply concerned about this unlawful, manmade humanitarian and national crisis that is being facilitated on our southern border.”

In addition to Braun and Gohmert, the April and August letters were signed by Sens. Kevin Cramer (R-N.D.), Cindy Hyde-Smith (R-Miss.), and Cynthia Lummis (R-Wyo.).

Representatives from DHS didn’t respond to a request for comment by press time.

The information sought by the lawmakers includes the following:

“The locations where illegal immigrants have been sent, transported, or provided ability or funding to travel to, or allowed to travel to by other funding including their own or private funding for all individuals who entered the U.S. without visas.

“For each named location, the total number of immigrants who have been sent, transported, or provided ability or funding to travel to, or allowed to travel to by other funding, including their own or private funding to such city.

The signers noted that “this requested information is critical to understanding how the unabetted flow of illegal aliens over the Southern border affects all Americans in each of the 50 states.”

“It must be reiterated that members of the executive branch have a duty, and many have sworn an oath that would include the requirement to carry out the lawfully enacted legislation under the Constitution,” the letter reads.

“With an open border facilitating illegal entry into our nation and the manifold resulting criminalities, the executive branch is failing miserably in its duty.

“Your failure to provide this requested information over the past three months, an eminently reasonable amount of time, raises further concerns about the lack of transparency and your unwillingness to provide this important information to elected representatives of the people of this nation.”