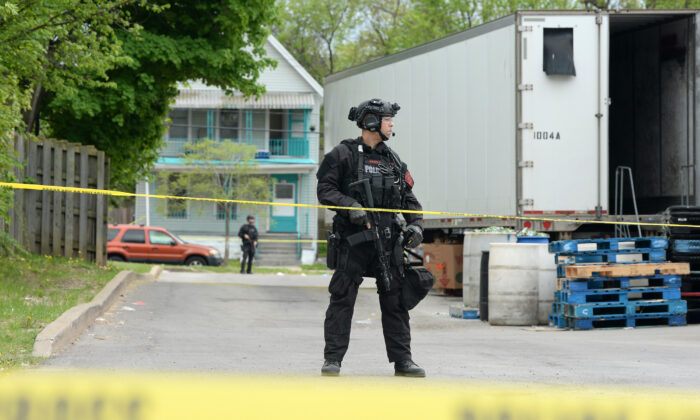 Buffalo Police on scene at a Tops Friendly Market in Buffalo, New York, on May 14, 2022. (John Normile/Getty Images)
US News

Homeland Security Could Do More to Address Domestic Terrorism: Watchdog

The Department of Homeland Security (DHS) could do more to prevent and reduce domestic terrorism in the United States, says the agency’s top watchdog, the Office of Inspector General (OIG).

After carrying out an audit to determine the extent to which DHS is able to address domestic terrorism, the OIG released its findings on Tuesday in a 29-page OIG report (pdf) that made six recommendations.

The OIG specifically sought to find out the “extent to which DHS made progress achieving its mission to prevent domestic terrorism.”

The report comes amid a number of mass shootings across the United States. The suspect in the Buffalo, N.Y. supermarket mass shooting in May was charged with  first-degree terrorism motivated by hate and 10 counts of murder as a hate crime

Although DHS has developed strategies to combat domestic terrorism, the department could do more to “strengthen its efforts,” the report stated. It was found that DHS only made recent progress in achieving its mission on that front.

It was found that DHS had made inconsistent efforts to help the United States counter terrorism.

“In 2019, DHS established a strategic framework with goals for countering terrorism and an accompanying implementation plan with actions designed to achieve those goals,” the report stated.

“However, DHS’ data showed more than 70 percent of the milestone actions in the implementation plan were not completed as planned.”

The report said this was because there was no long-term oversight and coordination via a governance body of DHS’ efforts to combat domestic terrorism.

The OIG also found that DHS has limited ability to access the information it needs to identify domestic terrorism threats.

DHS needs to improve how it identifies threats, tracks trends for future risk-based planning and informs partners and the public about them.

The report stated that DHS may not be issuing timely advisories to inform partners and the public to help the “take steps to protect themselves from threats.”

“Without a cohesive long-term approach to countering domestic terrorism, DHS may not be able to proactively prevent and protect the Nation from this evolving threat,” the report stated.

The OIG report made six recommendations, which DHS has agreed to.

Firstly, that a needs assessment is conducted to identify what staff and budget are needed to properly oversee DHS’ mission to counter domestic terrorism.

This should be carried out by the Counterterrorism Coordinator with support from the Office of Strategy, Policy, and Plans, Office of Intelligence and Analysis, and the Management Directorate, the report stated.

Secondly, the OIG recommended the setting up of a long-term governing body to oversee the counter-domestic terrorism efforts.

Thirdly, that to ensure information about domestic terrorism is shared in a timely way, the DHS Secretary work with the Attorney General and congressional committee to collect and share information.

The fourth recommendation was for DHS to partner with agencies to share information “that may inform development of national level statistics on terrorism and targeted violence.”

The final recommendation was for DHS to ensure it maintained the staff and resources needed to execute National Terrorism Advisory System functions.