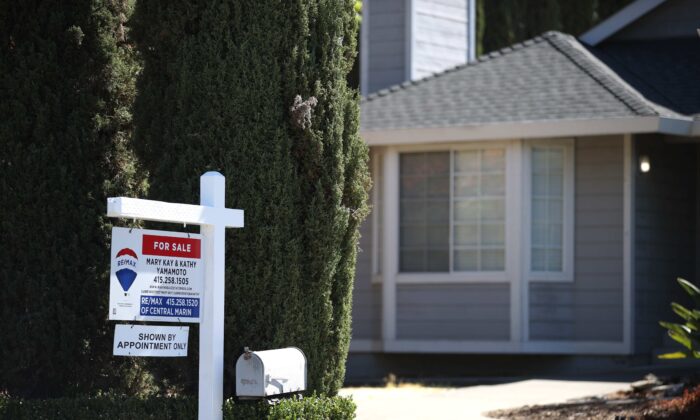 A sign is posted in front of a home for sale on in San Rafael, California, on Sept. 28, 2021. (Justin Sullivan/Getty Images)
Economy

Confidence among U.S. homebuilders fell in February to a four-month low amidst persistent delays to projects, rising construction costs, and building material production bottlenecks, according to a trade association, indicating a near-term gloomy outlook for the industry.

The National Association of Home Builders (NAHB)/Wells Fargo Housing Market Index (HMI) declined by one point to 82 in February—the second straight month that the index has fallen. In January, HMI fell by one point to 83 following four consecutive months of increases.

“Production disruptions are so severe that many builders are waiting months to receive cabinets, garage doors, countertops, and appliances,” NAHB Chairman Jerry Konter said in a Feb. 16 blog post. “These delivery delays are raising construction costs and pricing prospective buyers out of the market. Policymakers must make it a priority to address supply chain issues that are harming housing affordability.”

The CCP (Chinese Communist Party) virus outbreak has disrupted international logistics, resulting in products taking longer times to get to their destinations. In October last year, a presidential task force asked the ports of Long Beach and Los Angeles to remain open 24 hours in a bid to ease the supply chain crunch. However, these measures have had little impact.

Residential construction costs have risen by 21 percent on a yearly basis. Such high development costs have hit first-time home buyers “particularly hard,” NAHB Chief Economist Robert Dietz said in the report. He predicts higher interest rates this year to “further reduce housing affordability,” while demand continues to remain solid due to a lack of resale inventory.

The 30-year fixed-rate mortgage saw the biggest weekly increase since March 2020, rising above the 4 percent level for the first time since 2019.

“Mortgage rates increased across the board last week following the recent rise in Treasury yields, which have moved higher due to unrelenting inflationary pressures and increased market expectations of more aggressive policy moves by the Federal Reserve,” Joel Kan, MBA’s Associate Vice President of Economic and Industry Forecasting, said in a recent press release.

The decline in homebuilder confidence and mortgage applications is happening as rising home prices are negatively affecting housing affordability, NAHB reported on Feb. 15.

The organization estimated that 87.5 million households, accounting for roughly 69 percent of all households in the country, are not in a financial position to afford a new median-priced home. If the median price of a new home were to increase by just $1,000, around 117,932 households will not be able to afford the home.