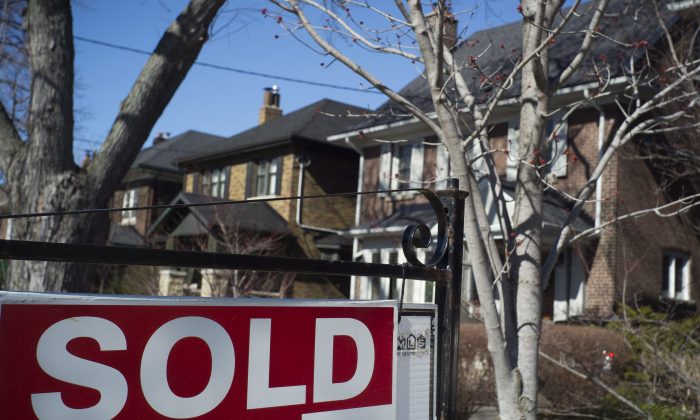 A sold sign is seen in front of a west-end Toronto home on April 9, 2017. Toronto’s overheating housing market should not be an impediment to kick-starting a private-label mortgage-backed securities market, according to two mortgage industry experts. (The Canadian Press/Graeme Roy)
Economy

Home Sales in US Rise to Nine-Month High, Shortages Persist

Sales of U.S. homes, including new and previously-owned, rose unexpectedly in October to their highest level since the start of the year as recovery-related employment level gains propelled a healthy demand for accommodation.

According to figures from the National Association of Realtors, there was an increase in the share of investors buying up homes last month, reflecting a growth in rentals as people start moving around for work. Contract closings increased 0.8 percent from September, totaling an annualized 6.34 million.

Existing home sales, which is calculated when a contract closes, make up 90 percent of the U.S. housing market while new properties take up the remainder. New home sales are based on contract signings.

“Home sales remain resilient given the extremely tight supply of homes for sale,” Shannon Brobst, an economist at Moody’s Analytics in West Chester, Pennsylvania, told Reuters. “Potential home buyers will continue to find it challenging to find a home that meets their budget.”

In October, previously owned single-family home sales went up by 1.3 percent to 5.66 million. Twenty-nine percent of sales that month came from first-time buyers, an increase of one percent from September.

The supply chain crisis has led to a shortage of construction materials, which, combined with an inadequate labor force and a growing backlog of houses to be delivered, has resulted in a tighter supply of homes and increased prices. Lumber and copper have gone up in price with almost 333,000 construction labor openings waiting to be filled.

“Inflationary pressures, such as fast-rising rents and increasing consumer prices, may have some prospective buyers seeking the protection of a fixed, consistent mortgage payment,” Lawrence Yun, NAR’s chief economist, said in a statement.

Approximately 1.25 million homes were on sale last month, a decrease of 12 percent from 2020. At the current pace, it will take 2.4 months to sell all homes available in supply. Last month, it was an average of 18 days. Realtors consider anything less than five months’ worth of supply a tight market, and healthy when it is around six to seven months.

Investors are also buying up properties on a steady pace, taking a 17 percent chunk of the total housing market. All-cash purchases, which are mostly from investors, accounted for 24 percent of all transactions in October.

Cheaper properties were constrained by supply, while more expensive houses showed strong sales. The majority of home sales were concentrated in the $250,000-$500,000 price range.

Sales rose in the Midwest, where most of the affordable housing is concentrated. The south of the country also registered robust sales while it remained unchanged in the expensive West, and fell in the Northeast.