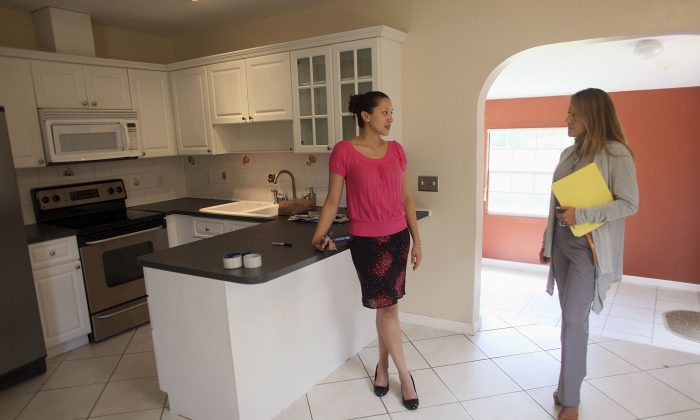 A real estate agent shows a home that is for sale to a prospective buyer. Canadian home prices continued to rise in April even as year-over-year sales fell three percent, according to the latest industry data. (Joe Raedle/Getty Images)
Canada

Canadian home prices continued to rise in April even as year-over-year sales fell three percent, according to the latest industry data that has left economists divided over whether the market can count on a soft landing.

“I think some people are perhaps confused by the fact that we’ve seen a drop in sales but prices haven’t fallen yet,” said David Madani, an economist at Capital Economics.

“But that’s normal because prices respond to sales activity with a lag,” said Madani, who believes it’s still too early to rule out a sharp correction in what until recently has been an overheated market.

“My expectation is that sales will continue to weaken, as they have been doing since the beginning of last year.”

The real test will be the summer months when the housing market typically heats up, Madani added.

With employment contracting in the first quarter of the year and the tougher mortgage rules put in place last July by federal Finance Minister Jim Flaherty, Madani said he sees little reason why sales would “magically” rebound, as some bank economists are predicting.

“Prospective buyers are just stepping back, because they’re afraid of what perhaps lurks for housing over the next couple of years,” he said.

But Douglas Porter, chief economist at BMO Capital Markets, said the fact remains that prices are still rising faster than inflation, albeit at the slowest rate in more than two years.

“Despite the very loud gnashing of teeth and excessive wringing of hands for well over a year on the topic, Canadian home prices remain incredibly calm, cool. and collected,” Porter said in a note.

“The surprises on the sales data in recent months have consistently been on the high side of expectations, not the low side.”

The Canadian Real Estate Association (CREA) said Wednesday there were 47,997 homes sold in April, down from 49,553 a year earlier.

On a seasonally adjusted basis, April sales were up 0.6 percent from March.

“Since changes to mortgage rules made in 2012 took effect, national sales have been running nine to 10 percent below levels posted in the first half of 2012, but they’ve been remarkably steady,” Klump said in a statement.

In Toronto the number of homes sold fell 5.2 percent compared with April last year, while in Vancouver sales fell six percent from a year earlier.