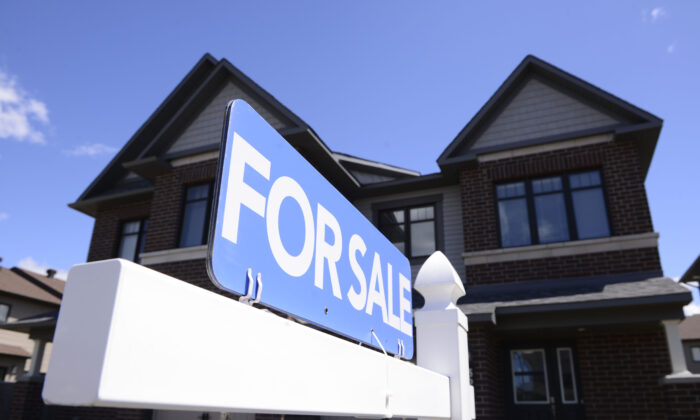 A new home is displayed for sale in Ottawa on July 14, 2020. (Sean Kilpatrick/The Canadian Press)
Canada

Home Prices to Fall Another 14 Percent by Spring 2023, RBC Forecasts

Home prices in Canada have yet to bottom out, with a decline of 14 percent expected in spring 2023, a Royal Bank of Canada economist says.

Robert Hogue, RBC assistant chief economist, told the Toronto Star that the bank raised its previous prediction of 12 percent decline to 14 percent on Sept. 15, after the Bank of Canada raised a key rate by 0.75 percent to 3.25 percent on Sept. 7 in an effort to further dampen inflation.

Considering that this is the highest the central bank’s policy rate has been since April 2008, when it was 3.5 percent, just prior to the onset of the financial crisis, Hogue said this latest forecast is taking future hikes into consideration.

“This forecast anticipates the upcoming rate hikes, so we don’t think it’s likely to change,” Hogue said. “The rate hikes are baked into this prediction. It’s not a huge change, but it reflects the conditions of the market.”

In a separate interview with BNN Bloomberg, Hogue cited data from a Sept. 15 report from the Canadian Real Estate Association (CREA) that shows national home sales slowed by 1 percent on a month-over-month basis in August.

The home price decline will continue in the near term as interest rates climb, the report adds.

“We see that trend continuing in the near term with the Bank of Canada poised to stay in tightening mode until the end of this year,” Hogue told BNN Bloomberg, adding that RBC is also raising its forecast for the policy interest rate to 4 percent in December, up from its earlier prediction of 3.5 percent.

“Gains were led by the Greater Toronto Area (GTA) and a large regional mix of other Ontario markets. These were offset by declines in Greater Vancouver, Calgary, Edmonton, Winnipeg, and Halifax-Dartmouth,” the report said.

In the Prairies, the CREA said home prices in Alberta appear to have peaked, while prices are still slightly on the rise in Saskatchewan. Manitoba recorded the only decline.

Home prices in Quebec have dropped over the past few months, while a similar downward trend is seen on the East Coast provinces of New Brunswick and Newfoundland and Labrador, the report said.