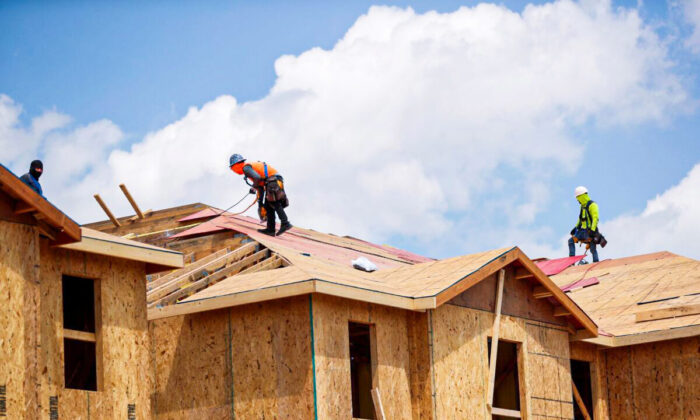 Carpenters work on building new townhomes that are still under construction, while building material supplies are in high demand, in Tampa, Fla., on May 5, 2021. (Octavio Jones/Reuters)
Markets

Single-home construction went down in October, while authorizations given for starting construction jumped to a 15-year high, revealing a market discrepancy with high demand but a significant shortage of supply.

Single-family housing starts dropped 3.9 percent to a seasonally adjusted annual rate of 1.039 million units last month, according to a report from the Commerce Department on Wednesday. This is the lowest level seen since August last year. The numbers fell throughout the country with the largest reductions in Northeast, Midwest, and West.

“Residential housing construction activity continues to flounder,” said Christopher Rupkey, chief economist at FWDBONDS in New York, to Reuters. “There are zoning problems, higher land costs, a lack of labor, and inflation has inflated the cost of raw building materials.”

Although economists polled by Reuters had predicted single-family home sales to reach 1.576 million units, the numbers came up to just 1.520 million units for October. In March, starts were at a 14-year-high with 1.725 million units.

The backlog of homes authorized for construction but not yet started had gone up 4.8 percent to 152,000 in October. Single-family permits inched past starts to a rate of 1.069 million units, rising 2.7 percent.

“The recent slowdown in project completions has limited home sales in new communities,” said Mark Vitner, a senior economist at Wells Fargo in Charlotte, North Carolina, to Reuters. “That said, the growing backlog of projects should keep builders busy for the next couple of years.”

Construction companies are facing shortages of labor and raw materials, mostly due to persistent supply chain congestions. Materials like lumber and copper have gone up in price. Besides that, there are almost 333,000 construction labor openings waiting to be filled.

“Supply-chain bottlenecks will likely limit construction activity in the short term, but the supply picture should look better in 2022,” said Abbey Omodunbi, a senior economist at PNC Financial in Pittsburgh, Pennsylvania, to Reuters. “Declining affordability and rising mortgage rates will soften demand in the next year.”

Homebuilding in the Northeast and Midwest regions is expected to ease during the winter. This could lead to a reduction in the increase of prices.

An increase in rentals across the country has been attributed to high home prices, making it difficult for first-time buyers to put up the down payment. Prices have resulted in more workers living further away from their workplaces, which increases commute times and eventually slows down economic growth in the region.