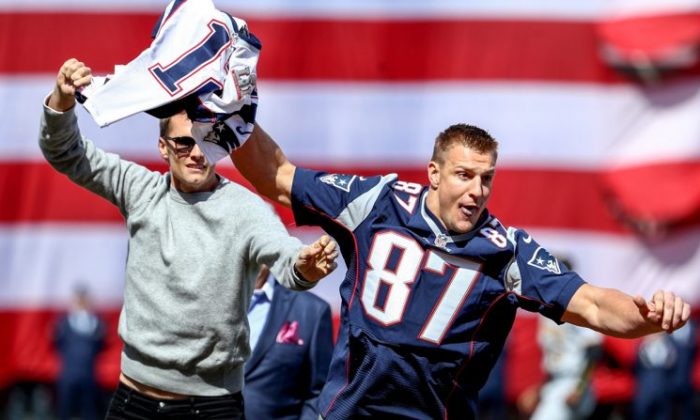 Rob Gronkowski of the New England Patriots steals Tom Brady's jersey before the opening day game between the Boston Red Sox and the Pittsburgh Pirates at Fenway Park in Boston, Massachusetts on April 3, 2017. (Photo by Maddie Meyer/Getty Images)
Crime and Incidents

According to Yahoo, multiple safes and possible guns were stolen from his home. Later, the website reported that his house had spiked fencing with a security system.

“The media has already arrived to Gronk’s home to cover the story … that the Patriots’ home was targeted by criminals who raided the place while Rob was in Minnesota for the Super Bowl,” TMZ said.

The police department in Foxborough, Massachusetts, said that it is investigating the burglary.

Gronkowski didn’t figure out about the burglary happened until he arrived home on Monday evening, before calling the police to report it at 6:18 p.m. ET, Yahoo News reported.

No one was home at the time, and no one was injured.

“I don’t know if you ever been the victim of a break-in, but when you are robbed and there is an intrustion into your personal space, it’s unpleasant whether you are Rob Gronkowski or Bill Baker. For him it’s a double whammy coming off the loss,” Foxborough Police Chief William D. Baker said, Yahoo reported.

There haven’t been any burglaries around Gronkowski’s neighborhood in recent days.

But Baker said that “residential burglaries are pretty common everywhere.”