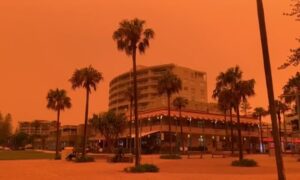 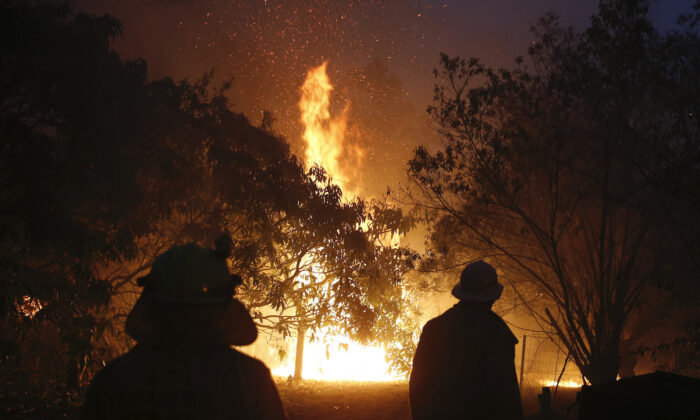 A fire near the Pacific Highway, north of Nabiac in the Mid North Coast region of NSW, on Nov. 12, 2019. (AAP Image/Darren Pateman)
Australia

The fire danger rating in parts of Australia’s most populous state, New South Wales (NSW) has risen back up to “severe” as hot, dry, windy conditions put an end to a brief reprieve for bushfire-hit areas of the state.

The Rural Fire Service NSW on Friday morning confirmed more than 250 homes have been destroyed since Friday, with almost 90 damaged. Some 480 outbuildings and 18 facilities have also been razed.

While conditions eased following a “catastrophic” danger rating earlier in the week, the forecast of hot, dry weather once again poses a threat on Friday.

A severe fire danger rating is in place for the far north coast, north coast, Greater Hunter, Greater Sydney Region and Illawarra-Shoalhaven, and large parts of the state are under total fire bans.

“It’s going to be another very difficult day for people from the Hawkesbury right up to the mid-north coast, right up to the fires burning on the Queensland border. Unfortunately these strong winds, up to 60, 75km/h across the ranges, are really going to cause challenges,” Fitzsimmons told the Seven Network.

The fire at Bora Ridge burning southeast of Casino flared to emergency level on Thursday but has since been downgraded to “watch and act” level. An additional four NSW blazes are at “watch and act”.

More than 1300 firefighters were battling some 60 bushfires on Thursday night, more than half of which were uncontained, the RFS said.

But the RFS believes their efforts have saved more than 2000 buildings.

“There’s fatigue alright, the physical fatigue, but these men and women, they’re so emotionally and mentally invested in just trying to save and protect their communities,” Fitzsimmons said.

As news broke that the death toll since Friday had risen to four, harrowing details emerged of the latest victim’s last hours.

Barry Parsons’ body was discovered in bushland on the southern end of the Kyuna Track at Willawarrin, near Kempsey, on Wednesday night.

His body was found five days after his last sighting and a final post on a Facebook page in the 58-year-old’s name described Friday’s horror conditions.

“Seriously looks and sounds like apocolyse (sic) out there. [Expletive] up being on your own in these times,” Parsons’ post read.

Parsons had reportedly been living alone in a shed in the remote area.

News of his death follows that of Julie Fletcher, 63, who died in the town of Johns River, and Wytaliba locals Vivian Chaplain, 69, and George Nole.

About 60 schools will remain closed on Friday.