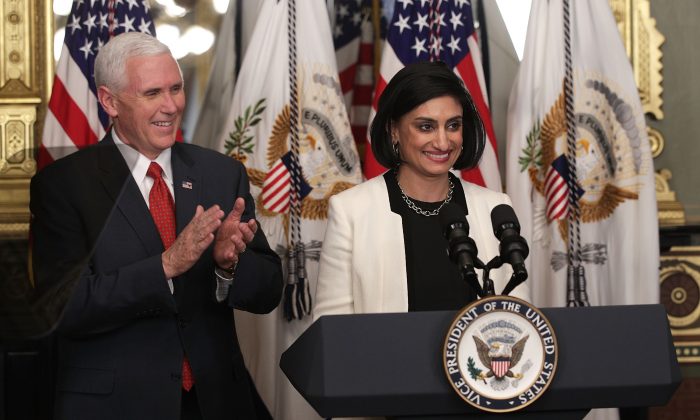 Seema Verma (R) speaks during a swearing-in ceremony, officiated by U.S. Vice President Mike Pence (L), in the Vice President's ceremonial office at Eisenhower Executive Building March 14, 2017 in Washington, DC. Verma is the administrator of the Centers for Medicare and Medicaid Services, which has proposed a rule change that would bar states from deducing union dues from Medicaid payments to home health care workers. (Alex Wong/Getty Images)
Politics

Public employee unions are having another check placed on their ability to compel workers to pay union dues.

On July 10, the Centers for Medicare and Medicaid Services proposed a rule change that would prohibit states from deducting union dues from Medicaid payments to home health care workers. These payments provide the salaries for these workers.

This change will repeal a rule implemented by the Obama administration in January 2014 that allowed states to divert Medicaid payments from the providers to third parties in specified situations, including to unions.

For decades, some states have deducted union dues from Medicaid payments to home health care workers, 70 percent of whom are caring for family members, according to Washington’s Department of Social and Health Services.

Rep. Cathy McMorris Rodgers (R-Wash.) condemned this siphoning of dues from providers to unions in an interview with Fox in January. “This is robbing our nation’s vulnerable who need Medicaid the most,” Rodgers said. “Every dollar that is diverted from a caregiver to a union hurts that family’s ability to care for their loved ones.”

According to the Freedom Foundation, which states that it is “working to reverse the stranglehold public-sector unions have on our government,” unions began adopting “coercive measures” after the Harris decision to ensure that home health care workers would continue paying union dues.

The Freedom Foundation estimates that “about $200 million … in union dues is siphoned out of caregivers’ Medicaid funds each year in at least nine states.” The public employee unions have been generous supporters of the Democratic Party.

Rodgers offered a bill in January that would forbid states from extracting union dues from Medicaid payments.

Sen. Ron Johnson (R-Wisc.) wrote CMS administrator Seema Verma asking “CMS to review this practice [of paying union dues out of Medicaid payments] and determine whether changes to law or regulation are necessary to ensure that Medicaid funds are provided to the program’s intended beneficiaries.” The proposed rule change seems to be in part a response to the senator’s request.