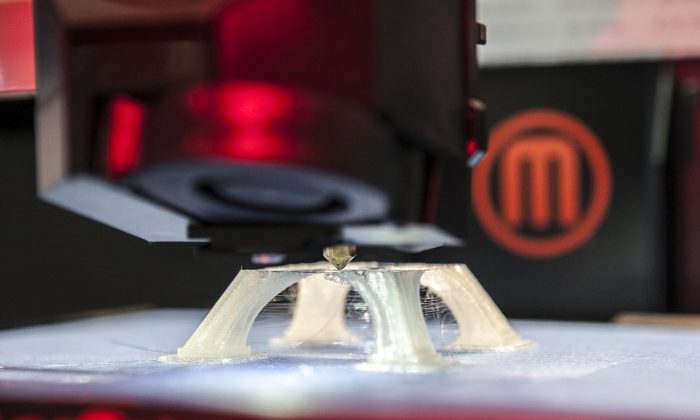 NEW YORK—Home Depot began sales of 3D printers in its stores on Monday, introducing the arcane gadget to a broader audience.

Twelve Home Depot stores in California, Illinois, and New York will carry the devices, which are manufactured by Brooklyn-based 3D printer company MakerBot and sell for just over $1,000.

Each store will have a special kiosk with working printers on display, targeting hobbyists, professionals, and non-specialists alike.

“Every day we see the magic of 3D printing becoming a reality with our customers; now Home Depot can also see that magic,” MakerBot CEO Bre Pettis said in a statement.

At the Home Depot in Midtown Manhattan, two 3D printers are on display at the MakerBot kiosk. For most of the shoppers who stop by, this will be the first time seeing a 3D printer.

“Most of them are asking very basic questions: What is it? How does it work? How much does it cost?” said Clayton, a MakerBot salesperson.

The 3D printers, called Replicators, make objects using an extremely precise glue-gun that shoots out a corn-based bioplastic at 400 degrees. Digital blueprint designs can be downloaded from MakerBot’s website Thingiverse, and users can also create their own designs with MakerBot’s software.

On Thingiverse, a compost shredder and a Duchamp chess set are among the most popular designs.

Displayed next to the Replicators, which sell for $2,899 at Home Depot and print objects with the maximum dimension of 9.9 x 7.8 x 5.9 inches, are sample 3D print objects like a T-Rex skull and a wrench.

The Replicator Mini, introduced this year, goes for $1,375. It can print objects with a 3.9-inch square base and 4.9 inches tall.

Bre Pettis has likened the Mini to an iPhone or a Swiss Army knife, and said that the product is for everyone.

For those who stopped at the kiosk, the 3D printers were a real surprise, even for those who had been familiar with the concept.

“I thought that 3D printers were expensive, that it couldn’t be affordable so far,” said Victor Brebesson. “I’m realizing now it’s cheaper than what it used to be.”

Brebesson works in motion design, where he’s familiar with the challenges of modeling 3D with software.

“It’s very hard to modelize,; it’s often really hard to get your way through the software,” he said.

The MakerBot retail store in NoHo, Manhattan, offers a wider preview of the uses of its 3D printers. On display were 3D prints of a full-bodied T-Rex, pyramids, a conch shell, and miniature busts of the MakerBot CEO.

The busts were made after Pettis had a panoramic picture of himself taken in the 3D photo booth, which was then uploaded into the MakerBot software and turned into a design.

MakerBot PR director Jenifer Howard said that Replicators had many practical functions like printing a missing piece from a self-assemble furniture kit, but stressed the customization aspect of 3D printing.

“Owning a 3D printer will make you think differently about the world,” she said, “you can personalize household objects by putting your face on it.”

Printing in 3D is commonly seen as something for hobbyists, but so were personal computers three decades ago, said Howard.

“Look at the trajectory of the personal computer,” she said. “Today, you couldn’t imagine your life without it.”

MakerBot’s biggest customers currently are professional design companies like architecture and aerospace firms, but MakerBot’s printers are now in its fifth-generation. Its partnership with Home Depot signals a leap to the mainstream.

“I have no idea what to create with a 3D printer,” said Brebesson after inspecting them at the kiosk.

“But I love to create; I use different 3D softwares.”