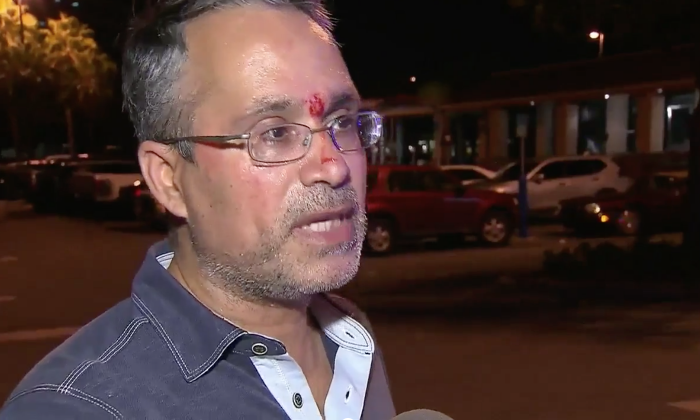 Joshua Shempko, a customer at Home Depot hot hit in a dispute over plywood. (Screenshot Via
Crime and Incidents

Home Depot Dispute: Customers Attack Each Other Amid Hurricane Preparations

Tensions boiled over at a Home Depot store in North Miami on Tuesday night while customers stocked up on supplies to prepare for a potentially catastrophic Hurricane Irma, which is expected to hit Florida this weekend.

A fight broke out between two customers over building supplies, WPLG-TV reported, as long lines and limited stock at the retail store pushed South Florida residents to scramble quickly to gather hurricane provisions.

The attacker then tried to flee from the scene after the employee was alerted over the incident. The male attacker was caught and detained by police later that day.

“He grabbed me and then he lunged,” Shempko told WPLG-TV.

Shempko told WPLG-TV the man hit him over a plywood dispute. In the video, blood can be seen on Shempko’s face.

Hurricane Harvey’s destruction in Texas may not have altered Florida’s well-tested storm plans, but it appears to have infused residents with a new sense of urgency as they prepare for approaching Hurricane Irma.

Officials said Harvey’s devastating flooding, coupled with the sheer power of Irma, ranked as the strongest Atlantic storm on record, had sharpened the focus of Floridians who were somewhat indifferent about preparing for past hurricanes.

“A lot of times they end up having hurricane parties here instead of evacuating,” Monroe County spokeswoman Cammy Clark said by phone. “That’s been the opposite this time around.”

Monroe County includes the Florida Keys, which ordered evacuations for all residents and tourists. Clark said she saw a steady stream of traffic leaving the travel destination as she drove to work early on Wednesday.

“This storm is bigger, faster and stronger than Hurricane Andrew,” Florida Governor Rick Scott told a news conference on Wednesday, referring to one of the costliest storms in U.S. history that struck southern Miami-Dade County 25 years ago.

Miami-Dade County Mayor Carlos Gimenez on Wednesday evening announced mandatory evacuations for most of the county’s coastal cities beginning at 9 a.m. (1300 GMT) on Thursday. Miami-Dade has a population of 2.7 million.

Officials across Florida said they saw signs of people taking Irma more seriously than past storms.

Residents were stocking up on water and batteries and even complaining that county leaders were not being quick enough to announce evacuations, said Don Walker, spokesman for Brevard County Emergency Management.

Houston officials were criticized for not ordering an evacuation ahead of the flooding that left hundreds of people in the country’s fourth-largest city trapped in their homes.

“Everyone is really in tune with this storm system. My neighbors are talking about it, and we don’t usually do that,” Walker said.

For years, many Florida residents, joined by an ever-growing number of newcomers, paid little heed to hurricane warnings as most opted to stay in their homes, county officials said.

Not this time around.

“I’ll tell you for the community, heck yeah, they’re taking this more seriously,” said Teri Barbera, spokeswoman for the Palm Beach County Sheriff’s Office, noting that many stores were out of bottled water by Monday. “They’re not playing.”