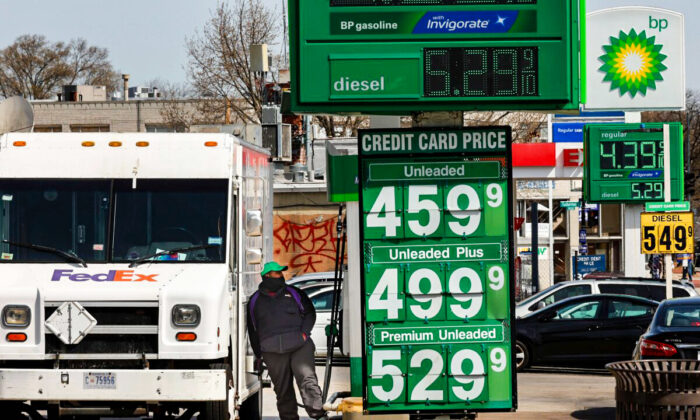 Gasoline prices hover around $4.00 a gallon for the least expensive grade at several gas stations in the nation's capital in Washington on April 11, 2022. (Chip Somodevilla/Getty Images)
Inflation

Home Depot co-founder accused the Biden administration of failing to tame historic inflation, and even making it worse by scrapping an oil pipeline project that would have served the national interest.

“We lost a whole year on addressing the issue. Only because, frankly, we have leadership today in America that isn’t willing to admit when they’re wrong,” billionaire investor Ken Langone told Fox News on April 12. “They made a terrible blunder here, and now the price has got to be paid.”

U.S. inflation rate has hit a four-decade high, reaching 8.5 percent in March from a year earlier. From food to energy, Americans are seeing rapidly growing prices owing to COVID-19-induced demands and supply chain problems, economists say. Other analysts have also attributed soaring prices to fiscal and monetary expansion in Washington.

The Federal Reserve should raise interest rates well above the inflation rate to tame the price increases, Langone said in the interview. “If you want to get inflation back, if you want a benchmark, you’re going to probably need interest higher than 8.5 percent.”

He referred to policies that former Fed Chair Paul Volcker rolled out in the early 1980s to bring rapid price inflation down, which had hit 14 percent by 1980—by raising a key short-term interest rate to about 20 percent. Up until 1983, runaway inflation settled back to just over 3 percent but millions of workers lost their jobs.

The Fed, which aims for 2 percent inflation, last month raised interest rates from near zero to deal with inflation. Policymakers have signaled they may accelerate the pace of rate hikes in the coming months.

On his first day in office, Biden canceled a permit for the construction of the 1,200-mile Keystone XL pipeline, which was set to carry oil from the Canadian province of Alberta down to Nebraska. The president said the move was to make way for his “administration’s economic and climate imperatives.”

“We’ve exacerbated the problem,” said Langone, as the pipeline had pledged to largely expand capacity to process the 168 billion barrels of locked-up crude oil under Canada’s boreal forest.

“The energy issue in America, we didn’t have to be deficient like we are. By now, that pipeline would have been almost complete. And Biden’s now saying, he’s now blaming the oil companies. This is a disgrace.”

Langone bet that Americans would feel the brunt of a recession in as early as eight months, although the Fed and the Biden administration are projecting price gains to moderate toward the end of 2022.

A White House spokesperson did not immediately respond to a request for comments.